By Jennifer Pernicano on June 7, 2016
Advertisement 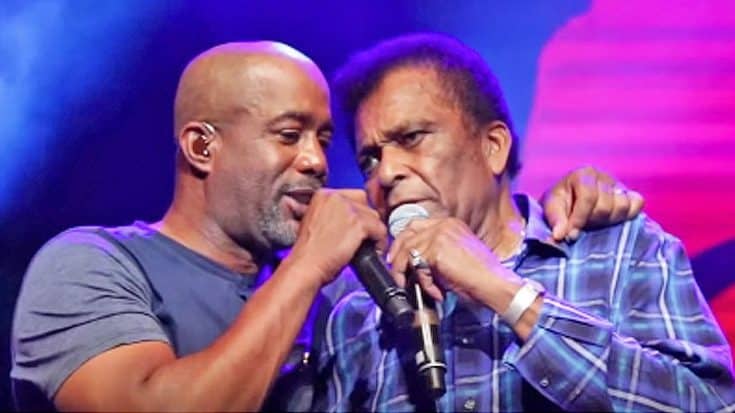 The 7th Annual “Darius And Friends” Concert at Wildhorse Saloon in Nashville, Tennessee served as a fundraiser for St. Jude’s and also brought out some of the biggest names in country music.

Hunter Hayes, Terri Clark, Scotty McCreery, Drake White and Charley Pride were among the performers. Each artist brought something special to the fundraiser, which raised over $220,000 last year.

A stand-out moment of the night was when Pride and Rucker sang Pride’s 1971 hit “Kiss An Angel Good Mornin’“.

The 82-year-old country legend looked as sharp as ever! He was walking all over the stage, dancing, and having a great time! He and Rucker exchanged some beautiful harmonies and you can tell the audience was eating it right up, as were we!

Not only was their duet a treat for the audience, it was just as meaningful for both singers.

“When he [agreed to perform], I couldn’t believe it,” Rucker told Billboard. “He’s such an icon and legend. I know that word gets overused, but he is, because of the kind of person he is and what he’s done in the music business. I’m blessed to call him friend, and that he would come out and do this for me.”

Pride told Billboard that the feeling was mutual.

“I met him backstage at the Grand Ole Opry when he broke into Country music. I’ve considered myself to be friends with him ever since,” he said. “I like him, and he’s having a tremendous career. I’m very proud of him.”

Billboard also reported that Pride hinted at “a possible upcoming collaboration with Rucker on a duets album“. That would be so exciting!

The history between these two men goes beyond friendship. Charley Pride paved the way for Darius Rucker, each of them becoming the second and third African-American Grand Ole Opry members, respectively.

Rucker’s 2008 country album debut produced three No. 1 singles, which made him the first African-American country singer with a No. 1 song since Pride’s 1983 hit “Night Games”.

Watch their awesome performance below.