By Jennifer Pernicano on May 2, 2014
Advertisement 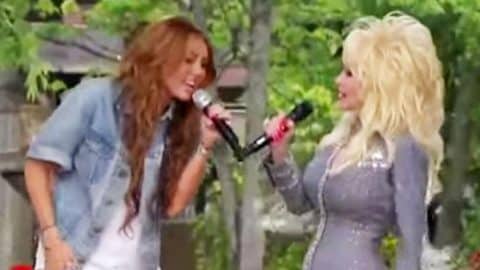 Country music legend Dolly Parton invited her goddaughter Miley Cyrus to join her on stage for a performance of her iconic “Jolene.”

The two perform the song as a duet in which Cyrus plays the role of the song’s antagonist, Jolene, whom Parton is begging to stay away from her husband. The singers are on the top of their game with Cyrus bringing a fun pop music twist to the beloved country classic.

“Give it up for my little fairy princess!” says Parton as Cyrus exits the stage. “I’m her fairy godmother!”

After six years, Miley Cyrus and her godmother Dolly Parton will once again be singing "Jolene" together on The Voice on the November 29th. pic.twitter.com/7hJOd7mncx

While Parton and her husband, Dean, have no biological children of their own, Dolly played an important role in the upbringing of Cyrus as her godmother.

This might be the first time Parton and Cyrus performed this song together, but since then, The Voice coach has regularly performed her godmother’s hit at live shows, including this now-viral “Backyard Session,” which has racked up over 166 million views since its release.

Watch their performance of “Jolene” in the video below and be sure to let us know what you think in the comments!