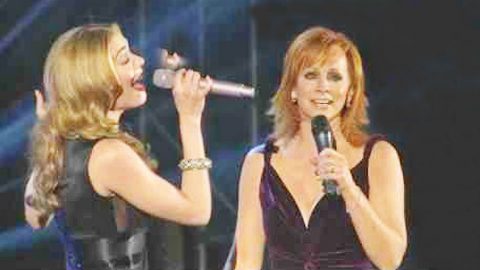 For many young artists, the opportunity to work with someone they consider to be their idol is nothing but a fleeting dream. However, in the case of LeAnn Rimes, her dream became her reality.

“I grew up studying every move this woman made,” said Rimes. “She is a strong, fearless, class act who is more powerful than ever 30 years into her career. A lifelong dream of mine was fulfilled recently for an album of duets. The woman I’m speaking of is Reba!”

The young singer then kicked off the performance before being joined on stage by the legendary Reba McEntire. Their vocals blended beautifully during the performance of the tear-jerking country ballad “When You Love Someone Like That”, each powerful vocalist pouring their all into each verse.

The duet came about as part of Reba’s 24th studio album, Reba: Duets, released in 2007. In addition to Rimes, a multitude of country artists were featured on the album as well as pop vocalists Justin Timberlake and Kelly Clarkson.

You can watch their duet below.