13-Year-Old Liam’s Rendition Of ‘Lonely Tonight’ Will Blow Y’all Away! 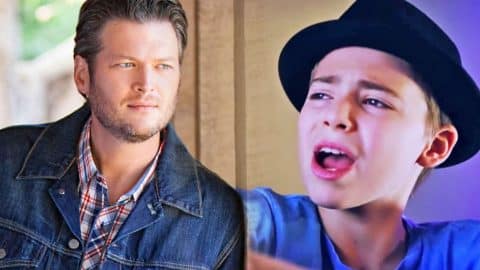 13-year-old Liam Lis covered Blake Shelton and Ashley Monroe’s hit song, “Lonely Tonight”, proving to the world that even a kid can rock this country song.

Liam is a popular YouTube cover artist with over 51,000 subscribers to his name. He has covered songs like, Snow Patrol’s “Chasing Cars” and Kelly Clarkson’s “Already Gone”, but this is his first upload of the Blake Shelton variety, and we’re glad he did!

“Lonely Tonight” was released on Shelton’s Bringing Back The Sunshine album in 2014. This song, which is about having a one last one-night stand with an ex-lover, reached #1 on the US Country Airplay (Billboard) chart and #2 on the US Hot Country Songs (Billboard) chart.

Liam’s performance of this song is beautifully done, showcasing his already blossoming talent. He definitely has a bright future ahead of him if he continues to give jaw-dropping performances. Though no one can sing this song like Blake, Liam’s version is definitely something to be heard.