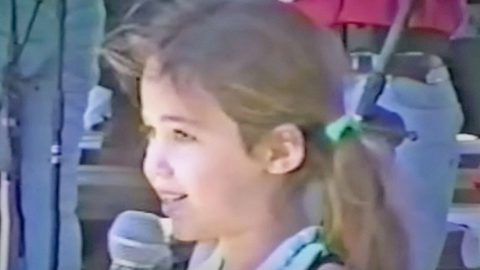 If you didn’t think Miley Cyrus was raised on good country music, you better think again. Music is a family affair for Billy Ray Cyrus and his family, and it began when his children were very young.

He introduced his kids Trace, Miley, and Braison during a 1999 show at Thompson Station, Tennessee.

“I think Miley’s got something special for y’all,” he told the crowd. “Now folks, stand back. Because you’re gonna get something here that you just can’t find anywhere else but Thompson Station.”

Six-year-old, pigtail-wearing Miley was handed the microphone from her dad, took a breath, and belted out the legendary George Jones song, “Why Baby Why.” After singing the first couple lyrics, the crowd gave her an impressive cheer and round of applause.

Bouncing to the beat, young Miley impressed everyone at the show, and left the stage with a huge smile on her face.  Little did the audience know, they were watching a huge pop star in the making’s earliest performance.

Watch the adorable solo below.