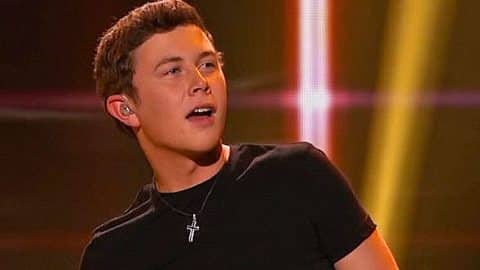 When bonding over their work, some country music artists become close friends, and some become such good friends that they pull out all the stops to prank one another on stage.

While Scotty McCreery was performing as a special guest on Rascal Flatts‘ Riot Tour in Mountain View, California, someone came out of “left” field and interrupted him in the middle of a song.

That someone just so happened to be tour mate RaeLynn, who came out on stage dressed as the “Left Shark,” made famous in Katy Perry’s 2015 Superbowl halftime show.

RaeLynn posted a video of her prank to Twitter, calling herself the “ultimate prankster.”

The entire prank was also filmed and posted to YouTube shortly after the performance. McCreery keeps singing while RaeLynn dances on stage and kicks around a giant beachball, and he even stops and dances with her at one point.

It seems that RaeLynn managed to pull off a prank that entertained both McCreery and the audience!

Look below for the video of “ultimate prankster” RaeLynn making her appearance as the “Left Shark” during McCreery’s performance.