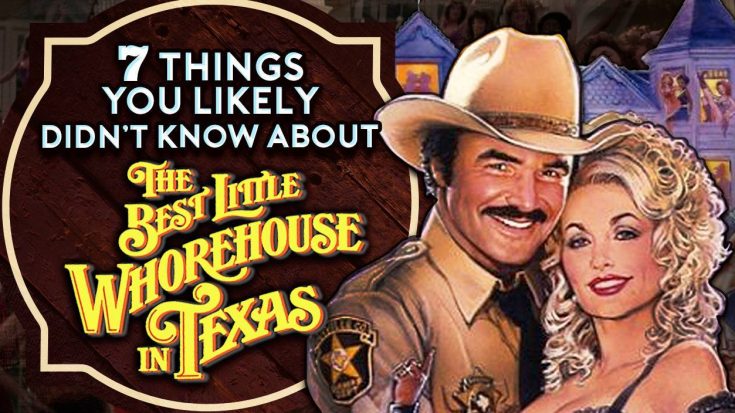 Two years after making her acting debut in the comedy film 9 to 5, country superstar Dolly Parton further established herself as an actress by starring in the musical comedy The Best Little Whorehouse in Texas. She played Miss Mona Stangley, the woman in charge of running the “Chicken Ranch” brothel in the town of Gilbert, Texas.

Miss Mona is in a relationship with Sheriff Ed Earl (Burt Reynolds), who turns a blind eye to his lover’s illegal line of work. But television personality Melvin P. Thorpe (Dom DeLuise) ends up exposing the brothel, and chaos ensues.

With Parton in a leading role, the film had great appeal to country music fans. It remains a fan-favorite today, and is one of the most successful films of Parton’s acting career.

We’re sure you’ve seen the movie a time or two yourself! But do you really know everything about it and its production? We’re sure you don’t!

That’s why we’ve put together this list…to fill you in on seven facts you likely didn’t know about The Best Little Whorehouse in Texas. Head down below so you can start learning all about them!