78 Yr. Old Charlie Daniels ‘Burns Down the House’ In Performance At The Grand Ole Opry

By Miranda Raye on October 21, 2015
Advertisement 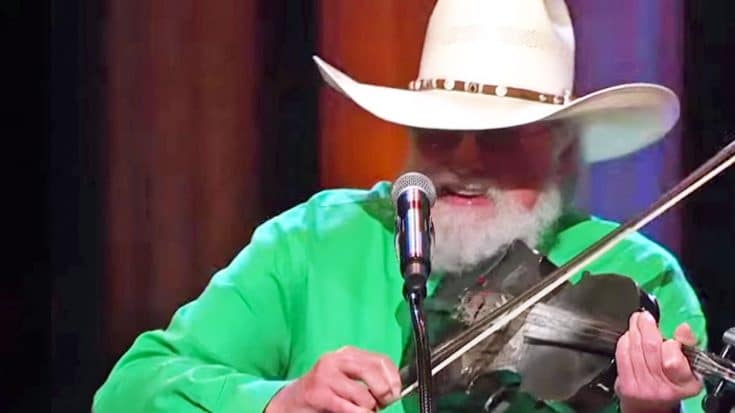 Charlie Daniels may be 78 years old, but he still has an abundance of energy, something he made clear during his recent Grand Ole Opry performance.

Along with The Charlie Daniels Band, Daniels took to the Opry stage on September 11 to perform the 2002 song, “Southern Boy.”

“Southern Boy” was written by Daniels himself, along with fellow country star Travis Tritt. The Charlie Daniels Band placed the song on their bluegrass and country rock album Redneck Fiddlin’ Man, which peaked at the 40th spot on the Top Country Albums chart. Tritt was also featured in the recording of “Southern Boy” that appeared on the album.

Although Tritt isn’t present for the band’s Opry performance of the song, it is still a showcase of great musical talent. Daniels starts off the song playing on his black fiddle, before he steps up to the microphone and starts belting out the lyrics.

The performance features various instrumental solos on the guitar and keyboard, as well as Daniels on the fiddle.

Daniels dances around the stage and swings his fiddle bow as he sings, and it’s obvious that he’s having a blast during the performance.

The audience seems to have a lot of fun as well, erupting into cheers at the conclusion of the performance, with Daniels throwing his bow out to them.

Once you start watching The Charlie Daniels Band’s “Southern Boy” performance, you’ll find the urge to tap your feet along to its infectious beat.

While you’re at it, enjoy the official music video for the song, featuring Travis Tritt.

Well it’s easy for a country boy to be misunderstood
When the honky tonks are jumping and the girls are looking good
Yeah, I get excited and some people think I’m rude
It’s the way my daddy raised me it’s my rebel attitude