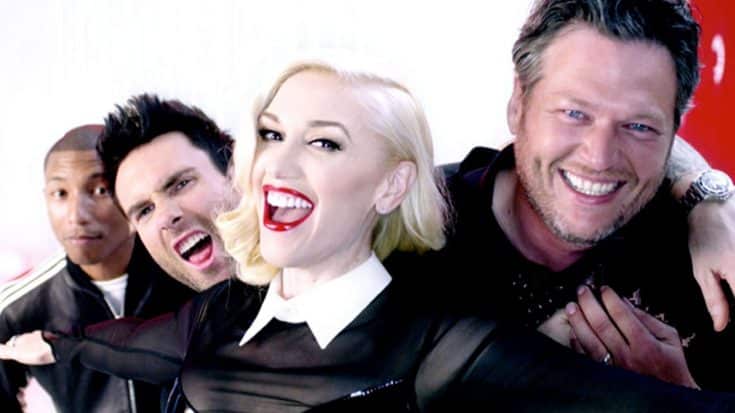 Ever since the news broke that fellow Voice coaches Blake Shelton and Gwen Stefani are now a couple, fans have wondered if their relationship would be addressed on the show.

So far, besides a little bit of flirting on and off-screen, there has been no mention of Shelton and Stefani’s budding romance.

But one Access Hollywood reporter tried to change that, by asking the Voice coaches point-blank what they thought about Shelton and Stefani’s romance.

However, all of the Voice coaches avoided confirming anything about the relationship, with Pharrell Williams covering for Shelton and Adam Levine for Stefani.

When the reporter asks Williams who broke the news to him and Levine, he has the perfect response.

“I asked [Blake] about it, right. And he said ‘I don’t know why, I just get wound up when it comes to making Adam get mad,’” Williams says. “It’s something that when I came to the show, that’s just what they naturally did.“

So when the reporter asks if Shelton and Stefani’s relationship is just a ploy to make Levine jealous, Shelton finds his own way to avoid the question.

“What is? You mean Pharrell and I being paired together during this interview process?” he asks.

Levine and Stefani also find a way to avoid the reporter’s questions…by literally dancing around them.

“I notice that you’re trying to maneuver your way to certain questions,” Levine sings, as he sways back and forth and snaps his fingers. “And you shouldn’t ask them.”

No matter how hard the reporter tried, she couldn’t get any of the coaches to spill the beans about Shelton and Stefani’s relationship.

Watch the Voice coaches’ hilarious Access Hollywood interviews in the video below.

We can’t help but wonder if any of the coaches will finally say something about Shelton and Stefani’s relationship one day!