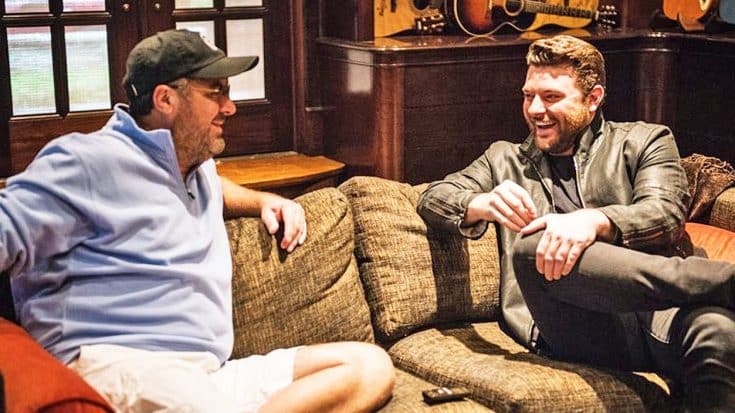 With a career almost three times as long as Chris Young‘s, Vince Gill has a few words of advice for the modern country artist.

In a new interview with Rolling Stone, the two singers sit down in Gill’s home recording studio to reflect on the past and look at the present, specifically Young’s new album I’m Comin’ Over.

Gill is actually featured on one of the songs on the album, called “Sober Saturday Night.” Not only does Gill sing in the song, but also has a featured guitar solo.

Young says that he really likes the song, and he wants it to be a single.

“Your solo made the song,” Young says to Gill. “Now it’s one of my favorites on the record, and if I have my say it will be a single…having you play on this record…it just really wouldn’t be the same without it.”

Gill was more than happy to be featured on the track, and says he knows how certain moments can instantly turn a song into a hit.

We talked right when we got started about the definitive moments that happen on records. “When I Call Your Name,” I always go back to that because it was the song that changed my world. But nobody thought much of that song. We tracked it, I sang it and had my part done and then Tony [Brown, Gill’s producer] and I started talking and realized it didn’t have a great intro. So we called Barry Beckett, an incredible piano player, and he came in at probably one or two in the morning and played an intro. And three notes in, you know what song it is. It was magical what he did to that song. He gave it its defining moment.

Young says that the collaboration between him and Gill is extra special, because when he was younger, Gill was the one who inspired him to chase his dreams.

“I saw you in Nashville, one of my first concerts,” Young says to Gill. “You sounded better than your record, and I thought, “Man, I want to do that.'”

Gill also has a few words of advice for Young, specifically when it comes to the struggles of getting radio airplay and getting songs on the charts.

“It still hurts when one [single] doesn’t work, because you put your heart and soul into it,” he says. “But you’ve gotta just run another up the flagpole. That’s the beauty of it, they’re never gonna run me off.”

Gill has certainly had his fair share of hits over the years, including “When I Call Your Name.” But as he tells Young, even decades into his career, he’s still striving to be better than he was in the past.

“But to me, being creative is not about rehashing everything you’ve done over and over,” he says. “It’s to continue to grow, continue to get better. I’m 58 years old and I sing better now than I did 30 years ago. So the only logical place to point is next.“

So what’s up next for Young? Well his album I’m Comin’ Over was just released on November 13, and since he’s only released one single from it so far, he’s sure to release another sometime soon.

Listen to Young’s personal pick for a single, which is him and Gill’s new song together “Sober Saturday Night,” below.

We agree with Young, we would love to see “Sober Saturday Night” become one of his next singles!