By Miranda Raye on December 11, 2015
Advertisement 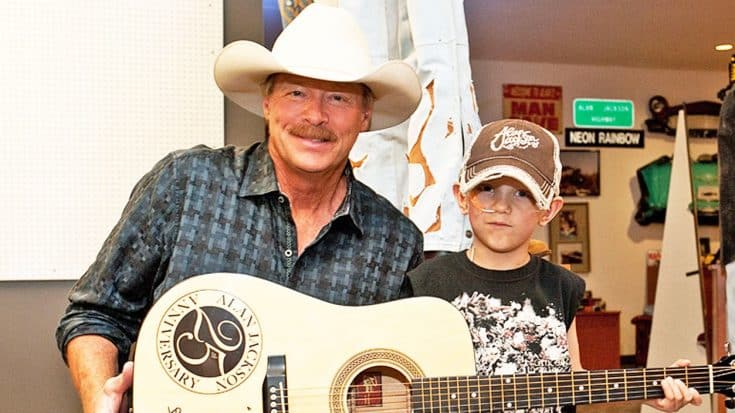 This summer, Alan Jackson made one very special fan’s dreams come true, and now the “Remember When” singer has a special birthday wish for him.

Joshua John, or “JDub,” who just turned six on December 11, has been diagnosed with Stage 4 hepatoblastoma liver and lung cancer. For the longest time, his biggest dream was to meet Alan, and when Alan heard about him, he made sure his dream became a reality.

This summer, Alan arranged a limo ride to bring Joshua John to the Country Music Hall of Fame to meet him, and he also gave him an autographed guitar. Joshua John’s mother posted a special message on his Facebook page, Prayers For JoshuaJohn, thanking Alan for making Joshua John’s dream come true.

“I just want to say Thank You to God first of all that he saw fit for JoshuaJohn to meet Mr Alan Jackson…Thank you Alan Jackson and your very sweet beautiful wife and all of your team!” she said.

Now, on Joshua John’s 6th birthday, Alan shared a photo of the two of them together on multiple social media accounts, calling him his “Little Bitty Fan” in his birthday message on Facebook.

Joshua John’s mother also posted a birthday message to her son on his Facebook page, which Alan “liked” as well.

“I’m so glad God picked ME to be your Mom. He sent me the perfect 6 for our family. You are a wonderful Son and Brother!! XoXo,” she said.

When Joshua John met Alan this summer, the two of them sang his favorite song “I’ll Fly Away.” After Joshua John met Alan, a group of friends and family gathered together to sing the same song to him. You can watch their performance in the video below.

It was so sweet of Alan to send Joshua John a special birthday wish! We’ll definitely be keeping Joshua John and his family in our prayers.