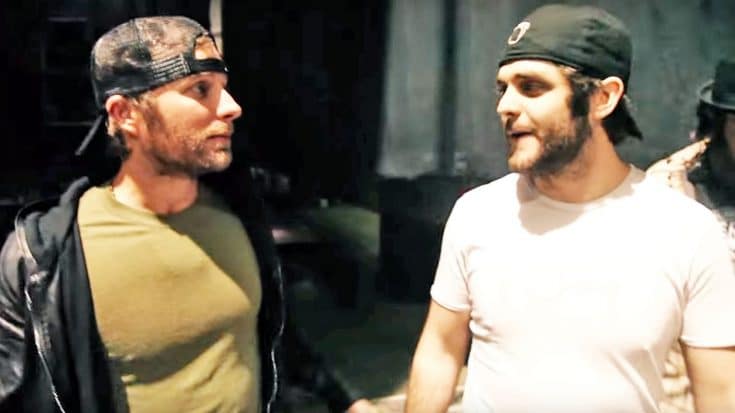 When Dierks was in need of a helping hand, he was glad his country-singing-colleague happened to be close by.

Two of country music’s top performers had a supermarket run-in this week when one of them headed inside for a missing ingredient and realized he had made a small oversight.

Headed to a Kroger store in Nashville, Dierks Bentley was going to pick up some ginger beer so that he could head back home and make some moonshine mule drinks, but realized he had forgotten something at home….his wallet!

As it turns out, he had seen Thomas Rhett at the same Kroger earlier, so he asked for a helping hand from his longtime pal.

In several posts to social media, each country superstar plays the situation off lightheartedly with Thomas giving a dialogue of the conversation and a snapshot of his friend waiting to be rung up.

Dierks "TR did you already leave Kroger?" Me "yeah man what's up?" Dierks "dude, I left my wallet at home can you spot me 10 bucks for ginger beer?" Love ya buddy @dierksbentley ?#blurry

Dierks, however, decides to include his buddy in his post and says of the plight, “Luckily I knew the guy behind me in line!”

hit Krogers for ginger beer. forgot money! luckily i knew the guy behind me in line. thx @ThomasRhett #moonshinemule pic.twitter.com/2hscPBxXPo

After the supermarket chain, Kroger, got wind of their small debacle, they responded on Twitter to Dierks Bentley with a witty prose featuring lyrics from Thomas Rhett himself! These two superstars have been pals for a good while, performed together numerous times, and it’s great to see they’ve got each other’s back!

Check out the video below of Thomas Rhett singing a song he wrote for Dierks called “Dierkin’ It”!