By Manly Bryant on March 1, 2016
Advertisement 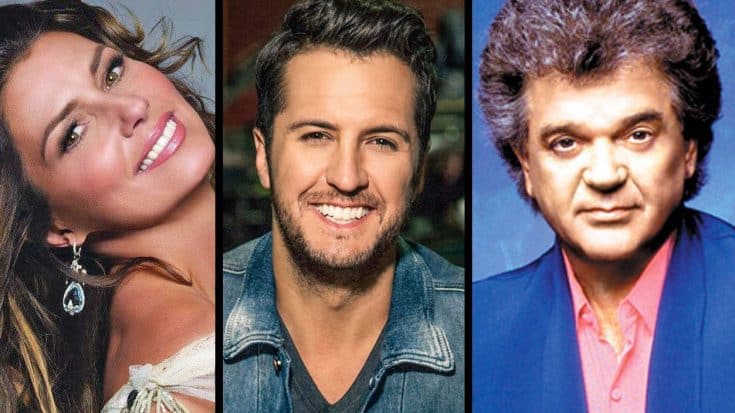 It’s no surprise that some people take stage names once they make it big, whether it be because their real names are hard to pronounce, or there is already someone in entertainment who has their same name.

No matter the reason, it always comes as a shock to fans who have grown to love these celebrities, and country singers are no different!

There are so many country singers who have taken a stage name and some may surprise you!

We’ve compiled a list of your favorite country singers who have taken a stage name below! Faith Hill was adopted as an infant and named Audrey Faith Perry by her adoptive parents. In 1988, she married her first husband, Daniel Hill, and has been using his last name ever since. Hill’s second husband, Tim McGraw also goes by a different name than he was given at birth, which is Samuel Timothy Smith. His biological father is major league pitcher Tug McGraw, but he grew up believing his stepfather Horace Smith was his real father. Tim found his birth certificate when he was eleven-years-old, which stated that Tug was his father. He didn’t form a relationship with Tug until he was 18-years-old, and eventually took his father’s last name. One-half of Brooks & Dunn, Kix Brooks was born Leon Eric Brooks III. It is reported that he got the nickname “Kix” before he was even born. He kept a beat when his mother was pregnant with him, and his parents began calling him Kix. We were introduced to LeAnn when she was just thirteen-years-old and she has lived in the spotlight almost her entire life. What most people don’t know about her though, is that her first name is actually Margaret. She dropped her first name and goes by her middle and last names: LeAnn Rimes. The legendary Patsy Cline was born Virginia Patterson Hensley. Her mother’s maiden name was inspiration for her middle name, which was shortened to “Patsy” by her manager Bill Peer in 1955. Patsy’s husband at the time was named Gerald Cline, so when she took his name after they married in 1953, her career took off and now she is forever known as Patsy Cline. Speaking of legendary, Hank Williams made a pretty good name for himself in his short career. Born Hiram King Williams, he is considered one of the most significant and influential American singers of the 20th century. As a child he went by the nicknames “Harm”, “Herky” and “Poots”. Williams changed his first name to “Hank” because he thought it would be a better name for country music. Travis Tritt is among many singers who dropped their first names and go by just their middle and last names. He was born James Travis Tritt and apparently liked the T alliteration. He married a woman named Theresa, and they have three children, Tristan, Tarian, and Tyler. Toby Keith also dropped one of his given names, but it was his last name, not his first name, like Tritt. Legally, his name is Toby Keith Covel. His daughter, also a country singer, took Keith’s stage name, and goes by Krystal Keith. 1/3 of the country group Rascal Flatts does not go by his given name, which is Stanley Wayne DeMarcus, Jr. His parents called him Jay from an early age and it stuck! Jay DeMarcus isn’t the only member of Rascal Flatts to use a name he wasn’t born with. Gary LeVox was born Gary Wayne Vernon Jr. LeVox means “the voice” in french, but Gary didn’t choose the name for that reason. He chose it because of “Vox”, a brand of amplifiers, and added the “Le” for being the lead singer of his band. DeMarcus and LeVox also happen to be second cousins. Eric Church was born Kenneth Eric Church. His father’s name is also Ken, but has been called Eric for a long time. Dropping one name is definitely a trend in country music. Jason Aldean chose his stage name because his birth name, Jason Williams was already used by multiple people, including a well known basketball player. He changed the spelling of his middle name, Aldine, and came up with the last name Aldean. Craig Morgan is another artist who dropped their last name once making it big. He was born Craig Morgan Greer. While he’s more Southern rock & rap than country, there’s no way we could keep Kid Rock off this list. Born Robert James Ritchie, Kid Rock also goes by Bob or Bobby. Friends also call him “Bobby Rock”. He chose his stage name after he played in various clubs as a teen. Club-goers called him “Kid Rock” because after they left, they said they loved “watching that white kid rock”. Trace Adkins was born Tracy Darrell Adkins and has gone by Trace for most of his life. His first single “There’s a Girl in Texas” catapulted his career and he is now a household name. RaeLynn got her start on The Voice and has toured with many superstar country acts including Miranda Lambert. Her real name is Racheal Lynn Woodward, but has been called RaeLynn by friends and family almost her entire life. Garth Brooks is one of the greatest country singers of all time, but would you believe us if we told you Garth wasn’t his real name?! His real name is Troyal Garth Brooks. He doesn’t look like a Troyal to us! He was born as Randy Bruce Traywick in 1959 and took on the stage name Randy Ray before sticking with Randy Travis. He tried to make a go of it as Randy Traywick, even releasing a self-titled album in 1978. He began making music as Randy Travis and after the re-release of “On The Other Hand” and 1986, he was convinced this stage name would stick. Shania Twain was born Eilleen Regina Edwards, but quickly changed her last name when her stepfather, Jerry Twain, a member of the Ojibwa tribe, adopted her. In 1991, she changed her first name to Shania, which means “I’m on my way” in Ojibwa. Hank Williams’ son was born Randall Hank Williams, but is known to the world as Hank Williams Jr. or just Hank Jr., mainly because he started out singing his late father’s music when he was very young. He acknowledges his first name on occasion calling himself “Rowdy Randall”. Wynonna Judd was born Christina Claire Ciminella. She was given the last name Ciminella after Michael Ciminella, the man her mother, Naomi Judd, quickly married after she was abandoned by her boyfriend and Wynonna’s biological father, Charles Jordan. Frontman of Asleep At The Wheel, Ray Benson credits himself as helping Wynonna choose her first name thanks to a song of his that mentioned Winona, Arizona. She gets the name Judd from Naomi’s maiden name. Johnny Cash was born J.R. Cash, but when he enlisted in the Air Force, they would not accept initials as a legal first name, so he signed up as John R. Cash. He eventually took the stage name Johnny Cash, and eventually nicknamed “The Man In Black”. Harold Lloyd Jenkins was born in 1933. He was named by his great uncle after his favorite silent movie actor, Harold Lloyd. There are a few different stories as to how Harold Jenkins came up with the stage name Conway Twitty. Allegedly, he decided in 1957 that his name wasn’t marketable and tried to come up with a better “show business” name. The Billboard Book of Number One Hits states that he was looking at a roadmap when he saw Conway, Arkansas and Twitty, Texas and chose the name Conway Twitty.

There are so many singers who don’t go by their birth names for so many different reasons!

Did any of these surprise you? Did we miss anyone?