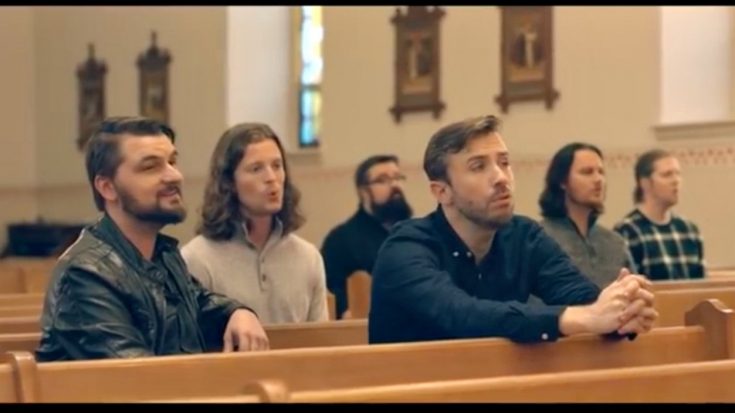 Just when we think Home Free can’t get any better, they blow us away with another new song. The a cappella vocal band, and winners of NBC’s The Sing Off, teamed up with a fellow Sing Off alum, Peter Hollens, to bring us one of the most moving renditions of ‘Amazing Grace’ you’ll ever hear.

Hollens is best known for his wildly popular YouTube channel in which he shares videos of his multi-tracked a cappella covers and collaborations with other artists such as violinists extraordinaire Lindsey Stirling and Taylor Davis. Hollens appeared on The Sing Off in 2010 with his a cappella group On The Rocks, the first official collegiate a cappella group in Oregon.

The ‘Amazing Grace’ collaboration with Home Free appears on Hollens’ newly released Christmas project entitled A Hollens Family Christmas, but it isn’t the first time the vocalists have teamed up. In 2014, the men recorded Dan + Shay’s ‘19 You + Me.’

The video for ‘Amazing Grace’ opens with Hollens and Home Free seated in church pews as Home Free’s newest member, Adam Chance, takes the lead on the first verse of the hymn. Peter Hollens takes over lead on the second verse as the guys of Home Free offer flawless background vocals. The third verse highlights tenor Rob Lundquist’s crystal clear voice before bass singer Tim Foust delivers a chilling take on the rarely heard fourth verse of the 237-year old tune with the help of Hollens. Tenor Austin Brown takes over the song’s powerful final verse in way that makes us all want to sing along.

Check out the video for Peter Hollens and Home Free’s rendition of ‘Amazing Grace’ below and share it with everyone you know!