Adam Levine Hysterically Commentates On Battle Between Gwen and Blake 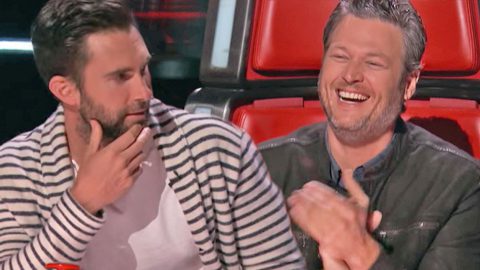 During Tuesday (Feb. 28) night’s episode of The Voice, 16-year-old Savannah Leighton sang her heart out and got two coaches to turn their chairs. Those coaches happen to be dating, so we knew we were in for a good battle!

Immediately after Leighton finished her powerful performance of Katy Perry’s “Unconditionally”, she burst into tears, so Gwen Stefani walked up to her to give her a big hug and congratulate her on an awesome audition.

“That is an illegal motion!”  Blake Shelton yelled. “What did y’all talk about already?!“

Levine, taking full advantage of the back and forth between Stefani and Shelton suggested he and Keys call it like a sports game.

“Oh that’s a bad sign, oh no. She almost went into tears when Blake said hello,” he said.

Shelton wasn’t going down without a fight and after he said he was willing to get in trouble for her, Levine commentated probably the funniest line of the night, “Looks like Blake takes the lead, but may be sleeping on the couch tonight.“

Each coach gave a great argument, with Stefani even passionately pleading with her. Watch the video below to find out which coach she chose.