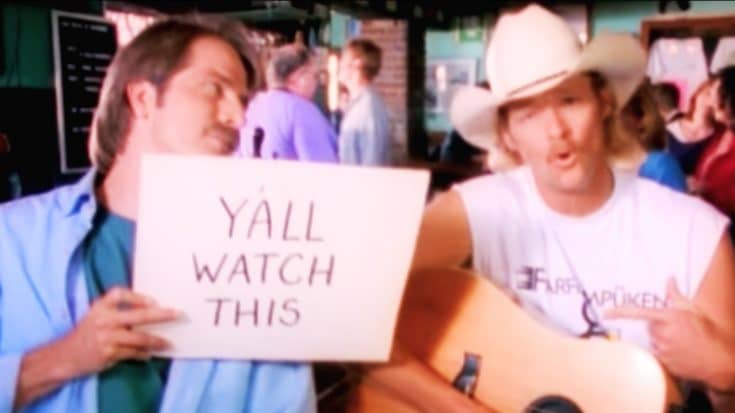 Comedian Jeff Foxworthy is known for his stand up acts in which he basically says rednecks do crazy and ridiculous things. People would be mad if they could… but he’s just too dang funny.

Some of his most famous lines are:

The comedian’s hilariously stereotypical jokes made him an instant household riot! After a few bits on his own, Foxworthy decided to team up with country music star Alan Jackson for a hysterical musical parody that’s sure to send you in a fit of laughter.

Titled “Redneck Games”, the two southerners invented hilarious games and rituals that are laughable spinoffs of the same activities and competitions you’d see at the Olympics.

Foxworthy’s voice echoes over an intercom, “Greetings y’all, and welcome all you danged foreigners from other nations! Dear Lord, be with our guests and prepare them for the butt whooping they are about to receive.” Just as he begins to welcome us, we are greeted by a rowdy bunch of rednecks ready for a competition!

The comedian jokes about the redneck tendency to hunt, telling Jackson, “I guarantee you when they let those doves go at the opening ceremony there are gonna be guys in the parking lot with shotguns.” Jackson eventually breaks into the chorus, and the two could barely keep it together. They send smirks between themselves throughout the entire video and you can’t help but join them.

The jokes keep coming with a variety of comparisons and clichés that are almost too accurate. Foxworthy might have just been adding to his “you might be a redneck if…” bit, but this video took on a whole life of its own.

Be sure to check out their parody below and let us know which joke was your favorite in the comment section!