By Manly Bryant on March 2, 2017
Advertisement 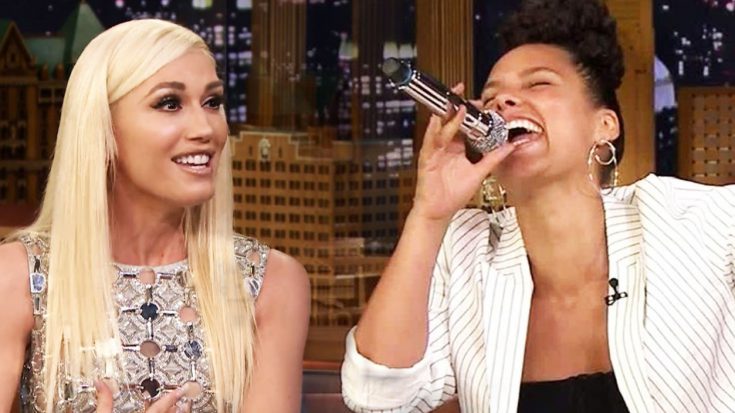 This coach gives one of the best impressions of her fellow colleagues during an interview with Jimmy Fallon that had fans roaring with laughter!

Stopping by The Tonight Show with Jimmy Fallon, seasoned coach Alicia Keys was thrilled to play one of Fallon’s hysterical games – The Wheel of Musical Impressions.

For quite some time she has been working alongside the other coaches on The Voice and even sat down for an acoustic performance with them!

Unbeknownst to her, the show’s producers had put some names in the hat of her fellow ‘Voice’ coaches, but Alicia Keys never backs down from a challenge!

The game has both Keys and Fallon spinning the wheel which will assign each an artist to impersonate and a random song to sing while impersonating them.

On Keys’ first spin, she landed on fellow ‘Voice’ coach Gwen Stefani‘s name and had to sing “Miss Mary Mack” in the style of Stefani. Needless to say, Keys made a smashing success of the endeavor and had Fallon buckled over in laughter and the audience roaring with applause!

The pair then takes turns impersonating musicians like Adele, The Pointer Sisters, Elvis Presley, and Janis Joplin. The whole clip is a fun-filled game that will have y’all rolling with laughter.

Check out Alicia Keys’ killer impression skills in the video below!