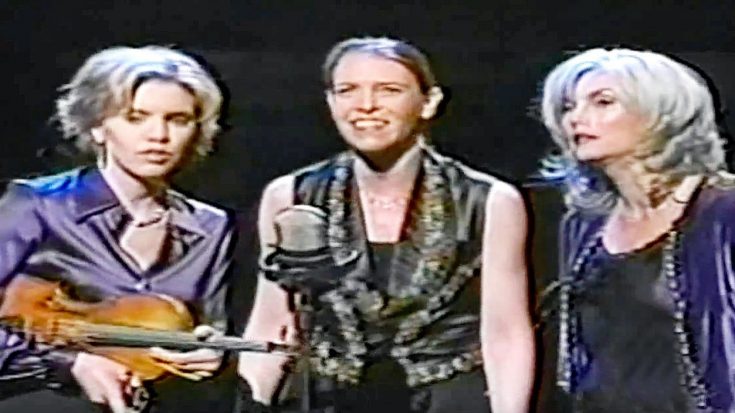 When the film O Brother, Where Art Thou? was released in 2000, it was a smash success. Set in the Depression-era South, the movie’s soundtrack was full of songs that originated from that period.

With the exception of some vintage tracks, most of the O Brother, Where Art Thou? soundtrack contained entirely new recordings of traditional songs. The material on the soundtrack varied, as multiple genres were represented, including country, bluegrass, folk, and gospel.

The version of the song that appeared on the O Brother, Where Art Thou? soundtrack was a brand-new rendition recorded by Alison Krauss, Emmylou Harris, and Gillian Welch. While it was the only track that Harris contributed to the soundtrack, Krauss and Welch both sang on other songs as well, including “Down to the River to Pray” and “I”ll Fly Away.”

Their rendition of “Didn’t Leave Nobody but the Baby” is particularly memorable because of their soft, delicate harmonies. It is also done a cappella, so those harmonies stand out as clear as day.

Back when O Brother, Where Art Thou? was new, Krauss, Harris, and Welch all appeared on The Late Show with David Letterman to perform “Didn’t Leave Nobody but the Baby.” Footage from that performance recently resurfaced on the internet, and it’s a musical masterpiece.

The three artists stood at center stage, surrounding a single microphone as they sang. With no instruments, no elaborate stage lighting, and no added glitz, they all delivered a performance that can only be described as mesmerizing.

Tune in below to watch the magic unfold as Krauss, Harris, and Welch sing “Didn’t Leave Nobody by the Baby.” Talk about a talented trio!