By Jennifer Pernicano on February 21, 2017
Advertisement 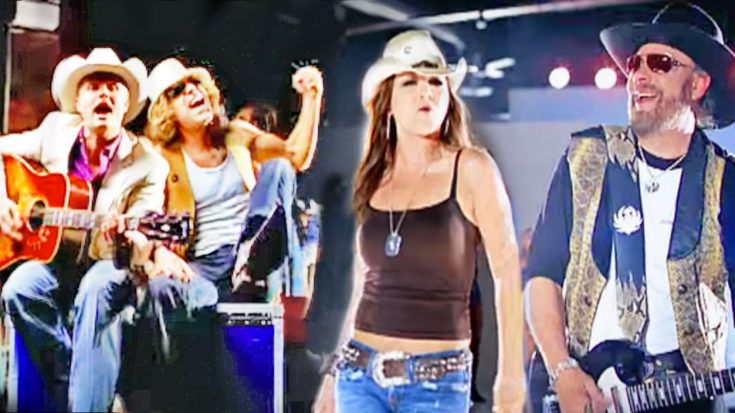 Country legend Hank Williams Jr. recruited some of his rowdiest friends to help him sing his 2006 song “That’s How They Do It In Dixie.”

11 years ago @HankJr's album "That's How They Do It In Dixie: The Essential Collection" was certified gold by the @RIAA. #MusicIsLife pic.twitter.com/PcQPQzEQjq

He couldn’t have a song with Big & Rich, Gretchen Wilson, and legendary rocker brothers Donnie and Johnny Van Zant, otherwise known as the duo Van Zant, without an equally rowdy music video.

The epic video takes place at an upscale fashion show. After a model wearing an evening gown walks the catwalk, the announcer says, “Next is a collection from a new designer. The House of…Bocephus?”

The guitar introduction to “That’s How They Do It In Dixie” came on the sound system and country girls clad in black tank tops, jean shorts and cowboy boots strutted their stuff on the catwalk. Out came Bocephus, guitar in hand, to start the rowdy party.

The video is a montage of the fashion show runway and the madness that goes on behind the scenes. When we are taken backstage, we are greeted by Big & Rich, who take the lead for part of the second verse.

We then see Donnie and Johnny Van Zant enjoying themselves backstage. They add a few rockin’ harmonies throughout the song.

Gretchen Wilson almost steals the show when she appears out of nowhere on the runway, giving some serious attitude.

Which collaborator was your favorite in the music video?

Watch the rowdy music video below.