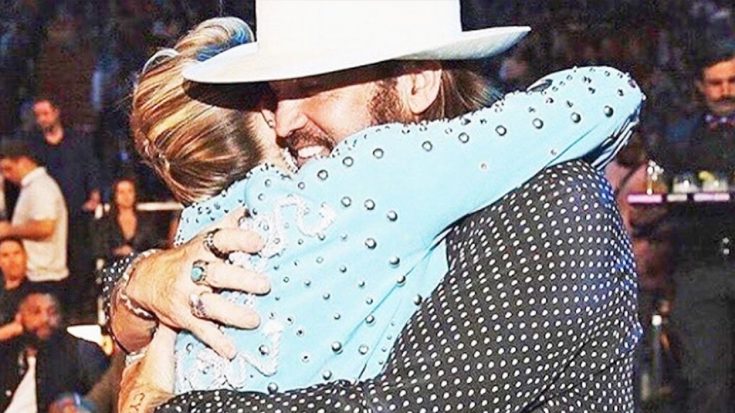 After a successful stay in the world of pop music, Miley Cyrus is returning to the genre that raised her, the starlet’s Nashville root’s apparent in her latest album, Younger Now. Celebrating the release of her epic return to music, Miley invited her father – country music royalty Billy Ray Cyrus – to join her on stage for a performance of his signature song, “Achy Breaky Heart.”

“My dad,” said Miley according to PEOPLE, before continuing, “really inspired this record a lot, I think, going back into those roots of everything he instilled in me.”

The proud father explained his parenting as the kind where he wants his children to “Watch what I do, and don’t do that, and you’ll usually get through life pretty good…Does that make sense?”

Dressed head-to-to in an Elvis-eqsue ensemble, the 24-year-old singer kicked off their rowdy performance with a skilled guitar solo, Billy Ray taking lead on vocals for the opening verse. The father-daughter duo came together to sing the iconic chorus, a moment that surely meant a great deal to both of them.

The three-act album launch party took place this past Friday (Sept. 29) where 150 lucky fans were invited to join her on the third floor of Nashville’s iconic honky-tonk, Tootsie’s Orchid Lounge.

You can watch their duet of “Achy Breaky Heart” below.