Blake & Gwen Hit The Gym Together, But There Was One Problem 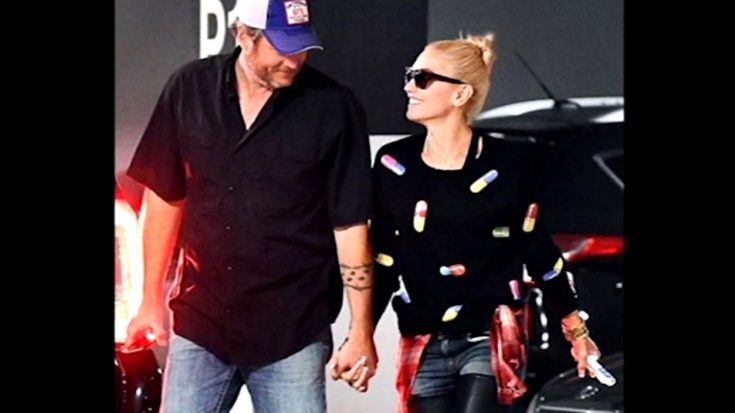 Working on his fitness with his girlfriend as his witness, country music star and fan-favorite coach on The Voice, Blake Shelton has run into a bit of trouble when it comes to hitting the gym.

Speaking with reporters before heading into the soundstage at NBC Studios for Tuesday’s live ‘Voice’ episode, Gwen Stefani and Shelton both opened up about their early-morning gym session she’d uploaded to social media app, Snapchat.

Stopping by to visit with ET’s Sophie Schillaci, Stefani explained that it was her boyfriend who motivated her to get active early that morning.

“He really…he kills it,” Stefani confessed. “It’s fun! It’s ’cause of him that I worked out this morning…I wasn’t gonna work out – he’s my trainer!”

But while Shelton seems to be hitting the gym hard just in time for summer, Stefani shared his biggest obstacle for the gym – finding clothes that fit!

“It’s funny,” she says. “Because he’s so tall that, like, literally no sweat suits fit him!”

She then explained that when they hit the gym he’s got high-water ankles at the end of his sweatpants and even shared a video of what she calls “floods” with her following on Snapchat.

For Shelton, he explained that there is some pain involved with his fitness regimen, saying “I get hurt in the gym every morning.”

Watch the comical interview with Stefani, Shelton, Adam Levine, and Alicia Keys below.