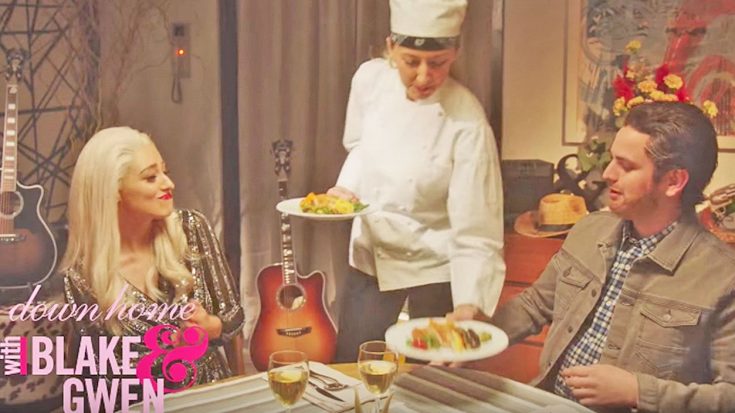 “Down Home with Blake and Gwen” just might be the reality show you’ve been waiting for! In the latest airing of Saturday Night Live on Oct. 7, the cast brutally mocked Blake Shelton and Gwen Stefani‘s lovey dovey relationship in the form of a fake reality show.

“The world is a complete bummer right now and here at E! we know that sometimes you just have to be like ‘uhhhhh,’ ” the narrator says to kick off the sketch. “So turn your off your brain with our new lineup of fall programming.”

The camera then pans to the host for the night, Wonder Woman‘s Gal Gadot, taking on the role of Keeping Up With the Kardashians star Kendall Jenner “complaining around a huge bowl of fruit” with her supermodel best friends. The sketch then introduces E!’s forthcoming reality series featuring the nation’s favorite musical couple.

“If you want to feel absolutely nothing, watch ‘Down Home with Blake and Gwen’ Tuesdays at 9:30. They’re just like us!” the narrator says just as Stefani (Melissa Villaseñor) and Shelton (Luke Nell) have a 5-star dinner placed in front of them by a personal chef in the country singer’s camo clad home.

Before eating their meal, Shelton and Stefani attempt to perfect their “I love you” harmonies. Struggling to nail their high notes, the country singer gazes lovingly at the blonde beauty, assuring her they have plenty of time to work on it.

Shelton and Stefani initially met as coaches on The Voice back in 2015, becoming virtually inseparable ever since. The lovebirds recently recorded a holiday-themed duet together for Stefani’s Christmas album in the form of swoon-worthy “You Make It Feel Like Christmas.”

You can watch the hilarious sketch below!