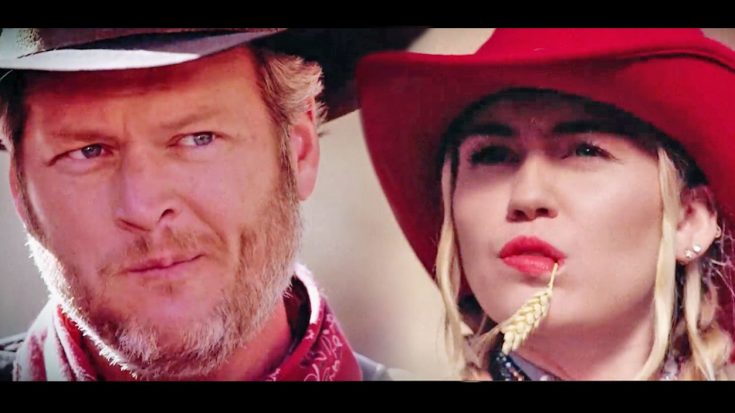 Since the inception of The Voice, Blake Shelton has served as the resident country coach, but with the addition of singer Miley Cyrus, who was born and raised in Nashville, some think she is also a good coach for country singers.

Cyrus’ father is, of course, country singer Billy Ray Cyrus, and grew up with many country legends coming over to her house as a child – heck, Dolly Parton is her godmother!

During a funny skit on The Voice, Shelton approaches Cyrus, who is sitting on a hay bale playing guitar while drinking sweet tea.

“There can only be one country coach on this show and I’m challenging you to a showdown at high noon,” Shelton says before admitting, “Actually can we make 3? I have a facial I can’t move.”

At 3 PM, the two coaches arrived at a Wild West-style location, each looking as country as ever. Standing a few yards apart from each other, as if they were about to partake in a quick draw duel, they hurled a few Southern insults to each other.

Instead of whipping guns out of their holsters, they each had a microphone! Shelton quickly began yodeling, to which Cyrus responded with a yodel of her own.

Shelton then tried to out-country her with country music knowledge. He said a classic country song, but Cyrus grew up on the classics! For every song he said, which included “I Fall To Pieces,” “He Stopped Loving Her Today,” and “Mama Tried,” she responded with the singer and the year they released it.

Shelton admitted that Cyrus’ knowledge of country music was impressive, but then brought up his 17 consecutive number one hits while slinging his guitar around his back. Cyrus was having none of this and showed off her ropin’ skills by lassoing him.

Looks like Shelton has accepted Cyrus as a fellow “country coach” on The Voice! Watch their hysterical skit below.

Hey y'all it's a country showdown between Miley Cyrus and Blake Shelton! Who will be THE Country Coach?!