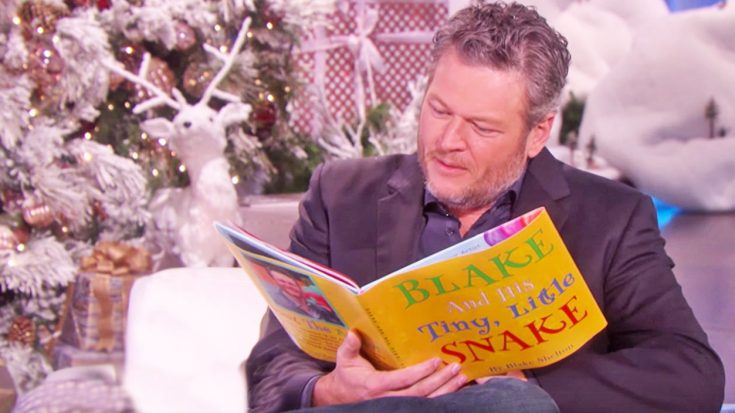 Looks just about every celebrity is writing their very own children’s book, even international superstar Kelly Clarkson got in on the action! In an unlikely turn of events, country singer Blake Shelton threw his name into the ring with his premiere children’s book.

“Yes I did,” replies the country singer. “I’m really excited about it too because this is something I’ve never [done before].”

So what is the product of the multiplatinum recording artist titled? Shelton’s book, Blake and his Tiny, Little Snake, is a semi-autobiographical tale of a young, strapping gentleman and his tiny, little snake. To the talkshow host’s amusement, the story was even more inappropriate than the title.

“Chapter one. There once was a man named Blake. Blake was a very tall and handsome man. But Blake had a very tiny little snake,” recites Shelton. “Even though Blake’s snake was so tiny, he loved it and played with it every day,” he continued before DeGeneres cut him off.

While the book may not actually exist, the story is absolutely hysterical and embodies everything we know and love about the “She’s Got a Way with Words” singer. You can watch the hilarious interview below and be sure to let us know what you think in the comments!