Blake Shelton Gushes Over How ‘Hot’ Gwen Stefani Is 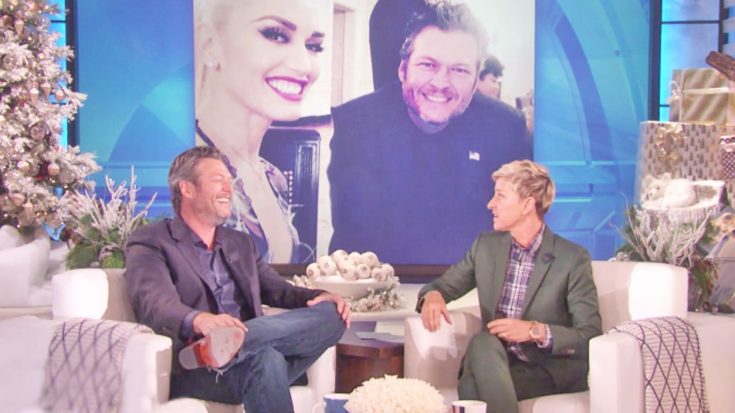 It’s often hard to get celebrities to openly discuss their significant other on live television, but when it comes to Blake Shelton, this is not the case. In an interview with Ellen DeGeneres the country singer jumps at the opportunity to gush over international popstar girlfriend, Gwen Stefani.

“I love talkin’ about Gwen!” says Shelton after the first mention of Stefani.

The talkshow host goes on to admit that she was amongst the many who found their union strange, stating they “seemed like the most unlikely couple.” And at a first glance, they might be, considering they are from two completely different worlds. The two shocked the world when they became an item back in Fall of 2015 following both of their high-profile divorces, leaning on each other during one of the most difficult times of their lives.

“You were going through something at the same time and it brought y’all together. You are just an adorable couple,” says DeGeneres. “Whenever I see y’all together, I mean—you’re just both crazy about each other, and I’m happy for both of you.”

The “Guy With the Girl” singer, clearly moved by the talkshow host’s kind words, goes on to to say it’s been good for him to be with someone like Stefani.

“It’s been good for me to be with somebody that’s so grounded and just a good human being with a great heart,” explains Shelton. “And she’s hot! Have you seen her? I mean look at that!” Shelton says proudly pointing at a picture of his girlfriend in the background.

From the sound of it, Stefani might just be the one! Shelton is fresh off a big AMA win and is up for three People’s Choice Awards.