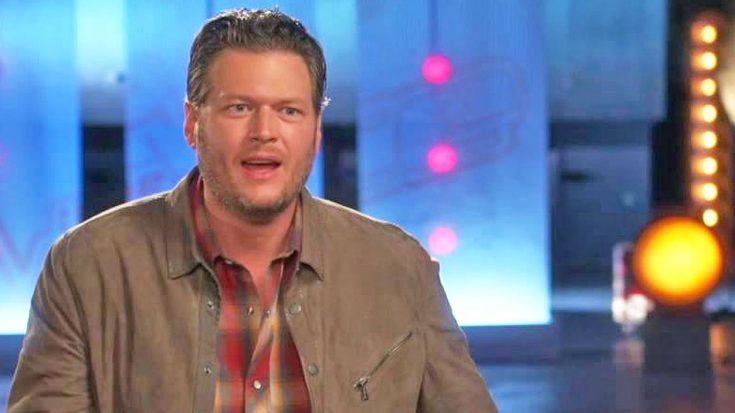 The name of Blake Shelton‘s latest album is called If I’m Honest, and he gets extremely honest in his new single, “A Guy With a Girl.” Released on September 26, the song has slowly been creeping up the charts.

The song is told from the perspective of a guy who is with a girl “everybody wants to know.” He sings that when he’s all alone, he’s his own person, “the guy with the guitar singing on a country track.” But the second he walks into the room with his girl, no one seems to notice him.

Speaking to Billboard, Shelton says the song serves as a reflection of where he’s at in his life right now. Anyone who follows him on social media or listens to his interviews knows how much he admires his girlfriend, Gwen Stefani. After all, his Twitter profile picture has been of her for months.

Shelton continued to fawn over Gwen in his interview with Billboard:

“‘A Guy With a Girl’ is my life right now. Out on the farm or touring, [I’m] that guy, and then at the end of the day, when it’s time to have a life and go to a party or something, I become the guy that’s with Gwen. It’s pretty cool.”

While Shelton thinks that he’s just “a guy with a girl” with Stefani, she feels like her relationship with him “woke her up” this year. Speaking to Glamour in a personal interview, Stefani shared how much Shelton has changed her life.

“He was a friend to me when I needed a friend,” she said. “An unexpected gift. And that became an inspiration in the songwriting.“

Even though it seems like Stefani served as the inspiration for “A Guy With a Girl,” that is not the case. Shelton had no part in writing the song. In fact, when co-writers Ashley Gorley and Bryan Simpson wrote it last year they didn’t even have a specific artist in mind.

It ended up being a perfect fit for Shelton, and now you can listen to it in the clip below.