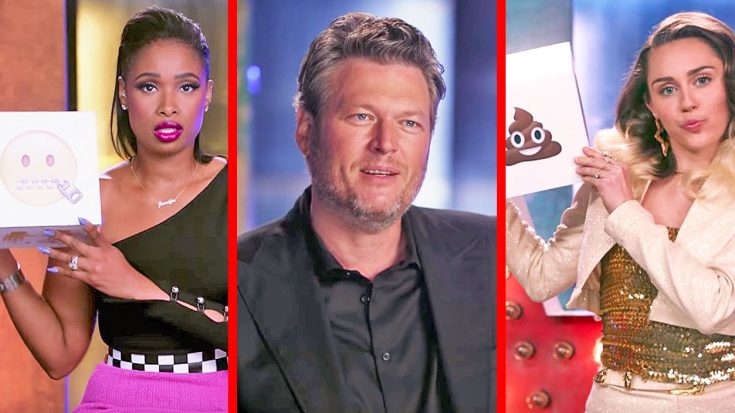 The new season of The Voice hasn’t even started yet, and the coaches are already going at each other! Adam Levine, Miley Cyrus, and Blake Shelton have all worked together before, but the dynamic has changed with the addition of Jennifer Hudson as a new coach.

Everyone seems excited to have Hudson as a coach this year, since she already has some coaching experience. She won The Voice UK in April, and seems determined to snag another win as a coach on The Voice in the U.S.

Even though she’s a new coach this season, Hudson is not immune to Shelton’s silly jokes. A preview clip of the season shows Shelton teasing Hudson over her win on The Voice UK.

“Congratulations on winning The Voice UK,” Shelton said. But then he turned his compliment into a teasing remark, saying, “We’re in the United States of America now.”

In promotion of the new season, The Voice coaches played a game called “The Emoji Game.” During the game, the different coaches reacted to certain statements by flipping over a cube with different emojis on it.

When asked what she thinks about Shelton’s jokes, Cyrus was brutally honest, saying she thinks of the “poop” emoji. Shelton’s longtime frenemy Levine was surprisingly nice as he shared his true thoughts about him. “Blake hasn’t really changed, which is why I still love him,” he said.

As for Shelton, he doesn’t really care what his fellow coaches think of his jokes. He enjoys them, and that’s all that matters to him. “The most fun for me is just trying to make those other coaches look or feel stupid,” he said with a smile. “That makes me happy.”

Tune in below to watch The Voice coaches answer more questions in “The Emoji Game.” Are you excited for the new season? We can’t wait!