By Manly Bryant on March 21, 2017
Advertisement 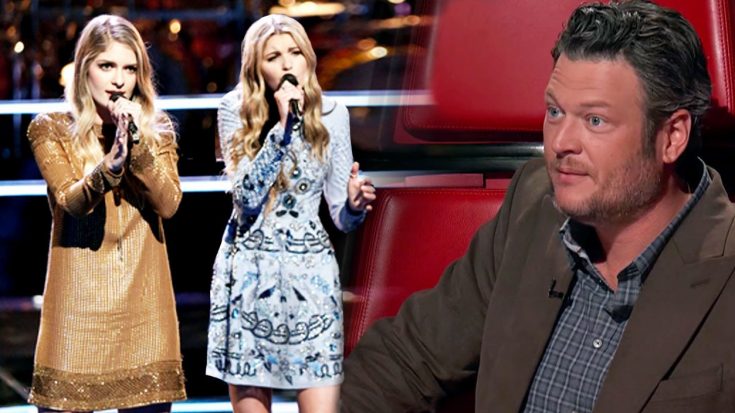 Torn between the two impressive singers, ‘Voice’ coach Blake Shelton paused heavily as he decided which person would stay on his team and which would have to go.

Performing the No. 1 hit penned by Taylor Swift and sung by country quartet Little Big Town, 15-year-old Brennley Brown and 25-year-old Lauren Duski poured their hearts out into “Better Man” during this first battle round.

Brown jumped into the song with incredible vigor and zest, while Duski showed her resilience and control over her voice with a more subdued, yet, precise sound.

All four coaches were impressed with their performance, noting the stark differences between the singers’ styles, and complimenting Brown on her stellar performance at such a young age.

Gwen Stefani revealed that if the decision were up to her, she would “probably pick Brennley, because something about your innocence – and I would want to work with that. But you both were so incredible!”

When the decision came down to Shelton’s choice, he revealed that making this choice was painful for him.

“I don’t wanna let either one of the two of you go, but I have to,” He started. “All this is gonna boil down to is what I can envision, moving forward, with my team.”

“This one hurts me,” Blake continued. “The winner of this battle is Lauren.”

But there was a surprise twist at the end that nobody saw coming! As soon as young Brennley Brown was up for a steal by the other three coaches, Blake’s girlfriend Gwen, slapped her hand down on the buzzer quicker than lighting!

Watch this amazing performance below and let us know if you think Blake made the right choice!