Bocephus Brings In His Buddies From Lynyrd Skynyrd For His Song “If It Will, It Will” 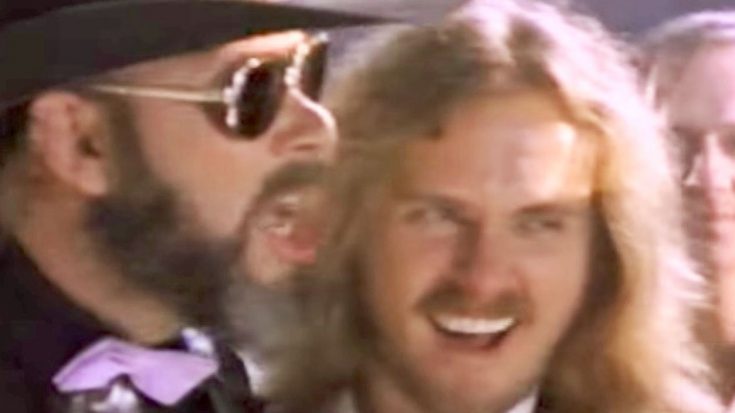 Hank Williams Jr. has his fair share of feel-good songs out there, and we’re sure you’ve heard most of them! But right now, we’re going to focus on one of those songs in particular…his 1991 hit “If It Will, It Will.”

“If It Will, It Will” was released as the lead single off of Hank Jr.’s Top 10 album, Pure Hank. The song was a pretty big hit, and managed to claim the 26th spot on the U.S. Hot Country Songs chart.

Written entirely by Hank Jr., the song opens with him talking about a teacher he used to have a crush on when he was a kid. He recalls a song that she would sing for his class, which was all about how the “real world” works.

That song takes form in the chorus of “If It Will, It Will,” with the gist being that things will happen if they are meant to happen, and if they don’t, then they don’t. As Hank Jr. sings, “Some days are good, some bad. You know, that’s the way it goes.”

Since the song is upbeat and has a fun-loving vibe, it seemed only fitting that its music video would match. Hank Jr. enlisted the help of a few famous friends for the video, which is basically one big party.

Bocephus’ first buddy to make an appearance in the video was rock and roll/R&B artist Little Richard. The two opened up the video standing in front of their dressing rooms, and shared a witty exchange with one another before they went inside.

Later, Little Richard and Hank Jr. emerged from their respective dressing rooms wearing costumes that looked more like what the other would wear. They had a good laugh about that before disappearing into their dressing rooms again to change into their normal attire.

Other than Little Richard, Hank Jr. also had the help of Lynyrd Skynyrd. Several of the Skynyrd guys made an appearance during the primary stage sequence of the video, including lead vocalist Johnny Van Zant, guitarist Gary Rossington, and keyboardist Billy Powell.

Overall, Hank Jr.’s video for “If It Will, It Will” is the definition of a good time. Tune in to it below and you’ll instantly feel a boost to your spirit!