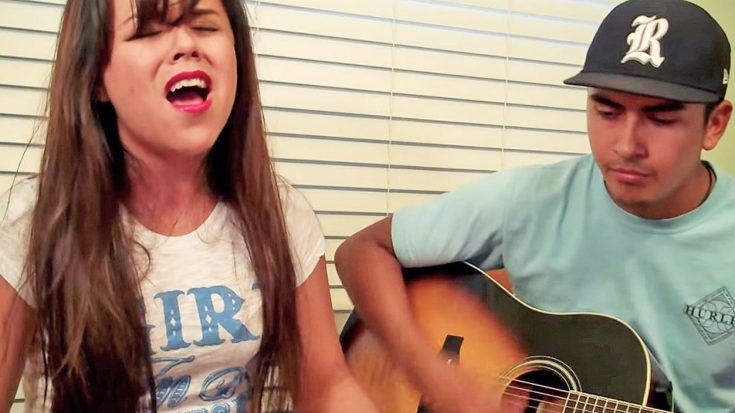 Gretchen Wilson made a powerful statement when she released her debut single in 2004. Titled “Redneck Woman,” the song served as Gretchen’s proud declaration of her redneck womanhood.

Apparently a lot of people were able to connect with her message, because “Redneck Woman” shot to the top of the country chart.

Today, “Redneck Woman” remains the anthem of country girls around the world. It’s always fun to listen to other artists’ takes on the song, and one of the best is by a young woman named Madelyn Victoria.

26-year-old Madelyn Victoria got started in music when she was still a child. She had her first public performance at age five and was the lead vocalist of her church by the time she turned 14.

In the years since, she’s gone on to open shows for major country stars such as Tracy Lawrence, The Charlie Daniels Band, and the Zac Brown Band.

Madelyn also has a strong presence on social media, particularly YouTube. Her YouTube channel is filled with an array of country cover videos, including classics like George Strait‘s “Amarillo by Morning” and more modern hits such as Josh Turner‘s “Long Black Train.”

One of the most popular videos on Madelyn’s channel is her cover of “Redneck Woman.” Joined by her brother Albert on guitar, Madelyn ended up delivering one red-hot rendition of Gretchen’s signature hit.

You won’t believe your ears once Madelyn starts singing. She has a voice that is rich and full of power, especially when she hits notes in the lower part of her range. Her voice is truly one-of-a-kind, which is perhaps why so many have been drawn to her cover videos and this video in particular.

Albert’s talent as a guitarist was also on full display in the video. He played with a great sense of energy, which kept the whole performance chugging along.

Overall, we’d say that there’s a great deal of talent in this family! Go ahead and tune in below to watch Madelyn and Albert issue their take on “Redneck Woman.”

Although Albert doesn’t have a public Facebook page for his music, Madelyn does. You can follow her here to watch more of her videos and keep up with any of her new projects.

Hats off to these two for delivering a cover that Gretchen would be proud of!