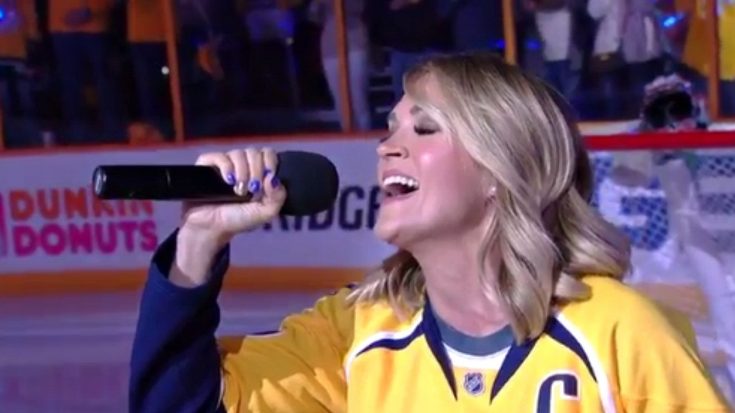 Carrie Underwood is arguably the biggest female star in country music. The American Idol alum is not only known for her killer vocals but for being the wife of professional hockey player Mike Fisher.

Underwood is known to show up at her husband’s games to cheer him and his Nashville Predators team on, so it wasn’t a huge surprise to see her on hand for Monday night’s game where the Preds faced the Chicago Blackhawks in the first round of the Stanley Cup Playoffs.  It was, however, a surprise to fans when Underwood took to the ice prior to the game to perform the National Anthem.

Donning her husband’s hockey jersey, Underwood wasn’t at all phased by the packed stadium or the fact that her husband stood just feet away ready to lead his team. Carrie pulled off a stunning and flawless performance of “The Star Spangled Banner,” a feat that didn’t go unnoticed on social media.

carrie underwood sang the national anthem at her husband’s playoff hockey game and if that isn’t goals idk what is ?

What phenominal pipes! @carrieunderwood absolutely nailed this one! Good on ya! #GoPreds ? ?? ? ?? https://t.co/I9B5WLChyZ

Watch Carrie Underwood’s surprise performance of the National Anthem below.