By Manly Bryant on February 1, 2018
Advertisement 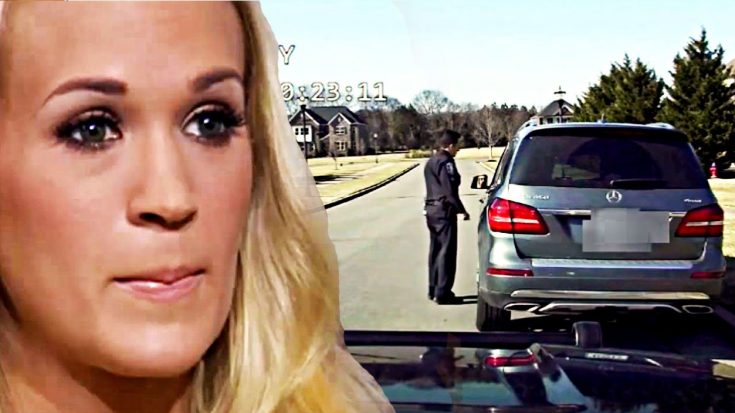 Officials released police dashcam footage of Carrie Underwood‘s 2018 run-in with the law and it shows everything in plain view.

Driving her metallic-gray Mercedes through the city of Brentwood, Tennessee, Underwood experienced her first-ever encounter with law enforcement for speeding. She first spoke out about the incident on Twitter, explaining what happened and apologized.

“Well, it happened today,” she wrote on the social media site. “After 18 years, I can no longer say I’ve never been pulled over for speeding. I feel so ashamed!”

Fortunately for her, the officer ended up letting her off with a warning, but that didn’t stop her from breaking down in tears after the encounter was over.

In the footage released by the City of Brentwood, it shows the officer stops her in a residential area and continues rolling as he approaches her vehicle.

“What’s the big hurry, ma’am?” he asked her, not revealing whether or not he recognized just who he had pulled over.

You can see her face flash across the side-view mirror as she reacts to the situation in a manner very fitting of her personality.

“I wasn’t even paying attention,” she admitted apologetically. “I know that’s no excuse.”

This is where the footage ends, but Underwood confirmed in her tweet that she was let off with just a warning, adding “I may or may not have cried in my car after the cop let me go. #ImSorry”

Watch the dashcam footage from Brentwood Police below.