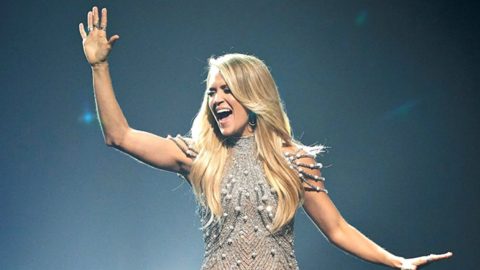 Every year, football fans have been anxiously await Super Bowl since pre-season games kicked off in August. Well, prior to the 2017-2018 season, Carrie Underwood fans were counting down the days until the big game for another reason.

Months before the Super Bowl, Underwood revealed that she had been asked to co-write a theme song for football’s biggest game. With the help of Ludacris, Brett James and Chris DeStefano, Underwood penned “The Champion,” a song about the making of a champion and the heart, hard work and people that are behind them.

The NFL previewed the song during halftime of the wild card game between the Los Angeles Rams and the Atlanta Falcons on January 6. The tease sent fans into a frenzy as they couldn’t wait to hear the entire song! The single was released a few weeks later to critical acclaim. But, it still wasn’t enough. Fans were anxious to see the video that would feature Underwood and some of football’s greatest players.

Just prior to the 2018 Super Bowl game between the New England Patriots and Philadelphia Eagles, the video for “The Champion” was released, and it was well worth the wait!

#TheChampion, as featured on NBC’s Super Bowl LII and XXIII Winter Olympic Games, is available now! Download or add it to your favorite playlist here: http://strm.to/TheChampion

Check out Carrie Underwood singing “The Champion” in the video below!

.@carrieunderwood kicks us off on the biggest Sunday Night of them all.

Watch the #SuperBowl now on NBC or stream: https://t.co/Q1JrUmZiy2 pic.twitter.com/Awxc9zikfF