By Jennifer Pernicano on December 28, 2017
Advertisement 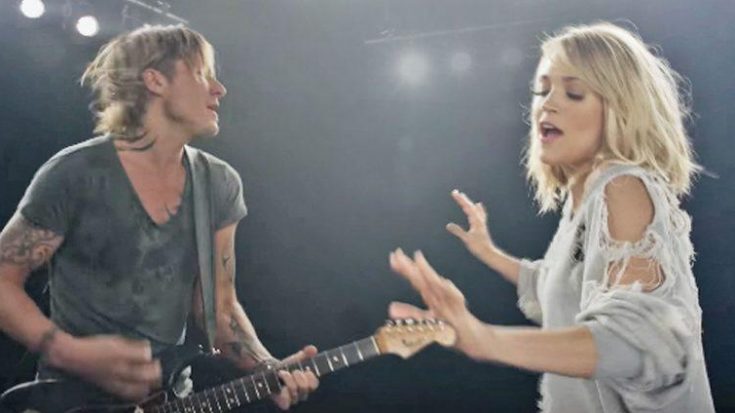 Just before their performance at the GRAMMY Awards on Feb. 12, Keith Urban and Carrie Underwood debuted the music video for their brand new single, “The Fighter.”

The video opens with Urban playing the opening riff on his electric guitar interlaced with footage of a young girl on the bus putting in headphones. After the girl gets off the bus, she walks down the street, then breaks into a choreographed dance perfectly timed with Urban’s opening lyrics.

Underwood appeared for the chorus, asking Urban, “What if I fall?”, to which he responds, “I won’t let you fall.” Right off the bat, Underwood sets the tone for her character, who gets in the groove by dancing through the entire music video.

Urban and Underwood get playfully flirty with one another during the second verse when Urban sings, “Look in the mirror/You’re beautiful, so beautiful“.

Urban included “The Fighter” on his GRAMMY nominated country album Ripcord. Upon the album’s release in May 2016, “The Fighter” sold 25,000 copies and debuted at No. 25 on Billboard‘s Hot Country Songs chart, jumping to No. 11 the next week. It’s amazing for a song to have this kind of success without being released as a single, which they finally did on February 6, 2017.

While being interviewed by Ryan Seacrest on the red carpet at the GRAMMYs, Underwood described their duet as “a dance-y type song” and a song the will “get stuck in your head in a good way.”

Urban was inspired to write the call-and-response styled song with songwriter and producer busbee when he was “thinking about how long it’d been since I heard a song with a guy and girl actually speaking back and forth to each other,” according to The Boot.

He added, “It’s a song about helping to heal and protect someone you love. It’s a song about reassurance that you’ll always be there to take the blows the world can throw. Carrie and I had sung together before, and I thought our voices blended really well — so she was unquestionably the right choice. It was such a relief that she wanted to do it.”

Their voices sound incredible together and we can’t imagine any other duo being able to pull this song off.

Also, who knew Carrie Underwood had moves like this?! We sure didn’t, but we do know that we absolutely loved seeing this side of her! We know that there is a professional dancer, with choreographed dance moves shown throughout the video, but Carrie’s looked improvised – as if she was overtaken by the music.

Watch their fun, playful, and flirty music video debut for “The Fighter” below.