By Jennifer Pernicano on December 12, 2016
Advertisement 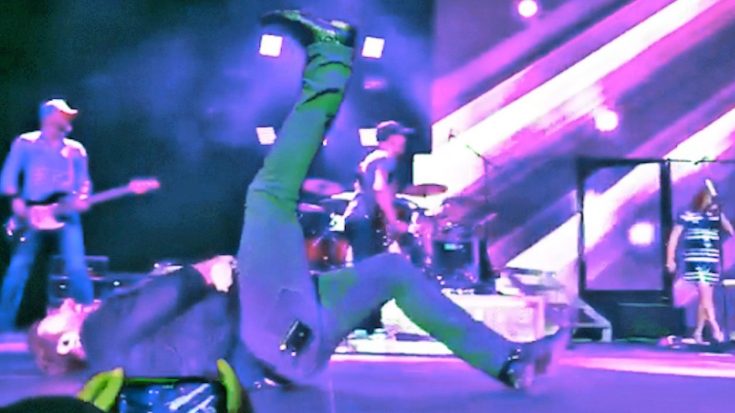 Country music singers are known for pranking their fellow tour mates and in truly epic fashions. On the final night of their joint I’m Comin’ Over Tour, Cassadee Pope decided to prank her tourmate and duet partner Chris Young.

Normally, Pope opens for Young and then joins him for their Grammy Award-nominated song “Think Of You”. Young starts the song solo and Pope walks out on stage when it’s time for her solo.

At this particular concert, it wasn’t Pope who emerged from backstage, it was Young’s tour manager, Bill Cracknell, who was dressed exactly like Pope, wig and all!

Young’s reaction is priceless, immediately knowing it was Cracknell who was wearing a short dress, heels, and a wig. Young fell right to the ground in a fit of laughter! Pope eventually walked out on stage where she and Cracknell had a hilarious back and forth banter.

It took Young a few seconds to stop laughing so he could sing again! Once he did, Cracknell bid farewell to the stage by hilariously lifting up his dress to show his boxers!

Safe to say, this was a successful prank that was enjoyed by all! Pope shared a before and after photo of herself and Cracknell, as well as the amazingly hilarious video of the prank. Watch it below.

Ladies and gentlemen… I give you my finest tour prank to date. Thank you to my guys for keeping this a secret for so long!#imcominovertour