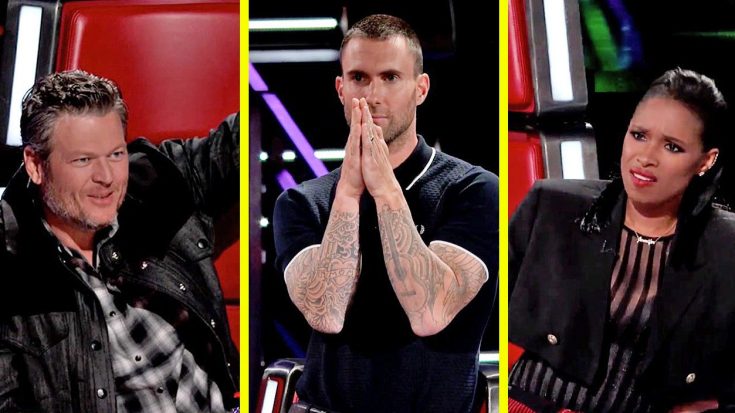 We’ve watched The Voice coaches engage in some pretty nasty arguments over contestants before. But the battle they fought over a contestant named Chris Weaver has to be one of the most chaotic and hilarious we’ve ever seen.

Prior to the kickoff of Season 13 in 2017 Adam Levine teased the season by sharing a clip of Weaver’s blind audition. He sang the famous Otis Redding song “Try a Little Tenderness,” and blew the coaches away with the power of his voice.

Levine was the first coach to turn his chair, and Jennifer Hudson quickly followed. Blake Shelton and Miley Cyrus hesitated for a little while, but both eventually decided to turn their chairs as well.

Cyrus started dancing at the end of Weaver’s performance, while Levine stood up in his place. It was clear from their reactions that none of the coaches were about to let Weaver go without a fight.

The chaos ensued the second that Weaver stopped singing. As we learned, it was a thing during Season 13 for Hudson to throw her shoe at contestants she wanted on her team. The other coaches played off of that, and began throwing their notebooks at Weaver.

Instead of throwing her own shoe, Hudson snatched Cyrus’ and threatened to throw it instead. But before she got the chance, Levine threw his shoe and jacket on the stage.

When Levine acted like he was about to take his pants off as well, Shelton chimed in with a request. “Please leave your pants on,” he said.

Hudson ended up throwing Cyrus’ shoe at Weaver, remarking how heavy it was. Cyrus quipped that Weaver was welcome to keep her shoe if he’d agree to be on her team. Shortly after all of that, Shelton slowly got up from his seat and started kicking Levine’s clothes into the crowd.

“Get that crap outta here,” he said proudly. “Make sure it’s all clear.”

The coaches all made some pretty good arguments to get Weaver to join their teams. But Shelton seemed to feel like he didn’t have much of a chance, so he pulled out a desperate plea.

“Look, today’s my birthday,” he said, prompting everyone else to chime, “No it’s not!”

While Shelton owned up to the lie, he decided to carry along with the birthday angle. “Okay fair enough, but it was my birthday and you didn’t get me crap,” he said. “Chris, you could make this the greatest birthday of my life.”

Nice try! He didn’t end up buying it, and chose Hudson as his coach.

Tune in below to watch the hilarity that unfolded after Weaver’s blind audition. This will forever be one of the show’s most hilarious moments.