By Miranda Raye on January 23, 2017
Advertisement 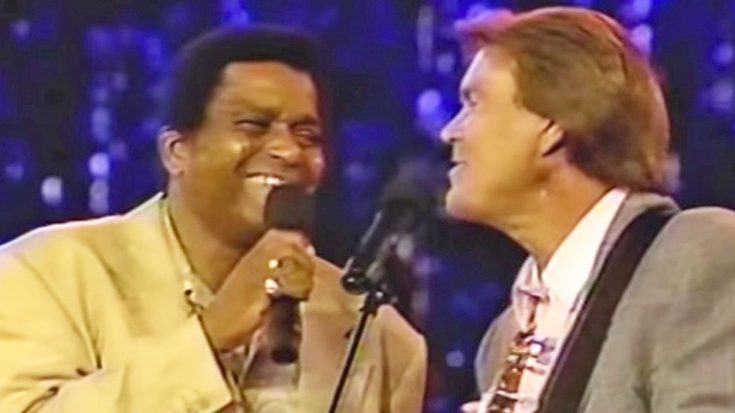 Anyone who hears Marty Robbins‘ song “El Paso” will never forget it. The catchy Tex-Mex style tune was the biggest hit of Robbins’ career. It claimed the top spot on both the country and pop charts following its release, prompting the Western Writers of America to name it as one of the Top 100 Western Songs of All Time.

In 1992, ten years after Robbins’ death, two other big names in country music decided to honor him by performing “El Paso.” Those two artists were Charley Pride and Glen Campbell, who joined forces on the tune during an appearance in Winston-Salem, North Carolina.

With only the sound of Campbell’s acoustic guitar to accompany them, the two country legends moved into an outstanding rendition of Robbins’ classic hit. Pride took the lead at first, singing alone while Campbell stood by with a huge smile on his face.

Pride’s admiration for Robbins goes back for years. While speaking to Rolling Stone about the mega compilation album Country Music of Your Life, Pride explained that Robbins’ “My Woman, My Woman, My Wife” was one of his favorite songs in the collection:

“He’s one of the five artists that I give tribute to in my show. I love them all, but he was one of the first that took me out on the road. He was so funny all the time. He was just good to me. So it’s not only that this song jumped out to me, but it was also thinking about how good he was to me and how I loved his singing and him as a person.”

Pride’s respect for Robbins showed through in his performance of “El Paso” with Campbell. His enthusiasm for the song was obvious to anyone watching him perform that day.

As for Campbell, his performance was equally impressive. The way his voice sounds in combination with Pride’s huskier, deeper voice is pure magic. We don’t know why these two didn’t collaborate more often!

Scroll down below to catch the absolute masterpiece of Pride and Campbell singing “El Paso” together. It doesn’t get much better than this folks!