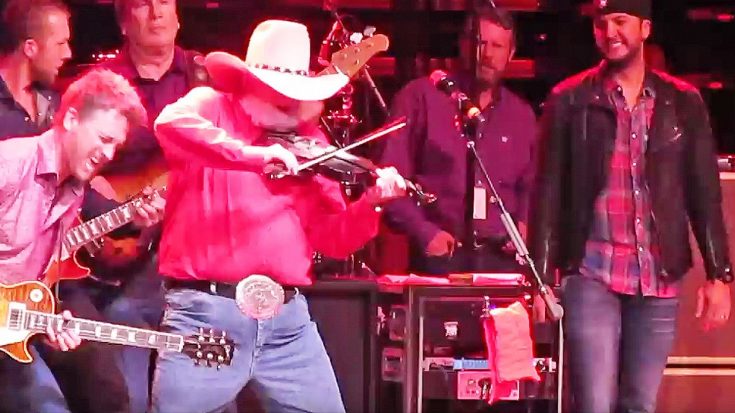 In 2016, Charlie Daniels held his annual Volunteer Jam in conjunction with his notable 80th birthday for a riveting night of live performances and unforgettable moments. The double celebration featured performances from artists including Kid Rock, Chris Stapleton, and the one and only Luke Bryan! Daniels and Bryan shared a special duet that is sure to be seared into his fans’ minds as one of the most exciting performances of the event.

Performing Daniels’ iconic song “The Devil Went Down To Georgia,” the two men joined forces for a fiery duet that sent their incredibly eager crowd soaring! Only fitting, Daniels came equipped with his fiddle, a instrumental staple to the icon. Battling it out with the “Crash My Party” singer, vibrant lights and music took over the stage, immediately fixating the audience on the performance that stole the show!

Daniels undeniably proved that age should never dictate your ability to carry on with what makes your heart happy, as he aggressively strikes his fiddle to produce one of country music’s greatest songs! As the song finished, Bryan let out a mighty yell as the audience bursted into an uproar of applause and cheers. The two performers shared a hug in celebration of the performance they had just pulled off.

Check out the video below!