CMA Brings Everyone On Stage For An Absolutely Loaded Opening Act 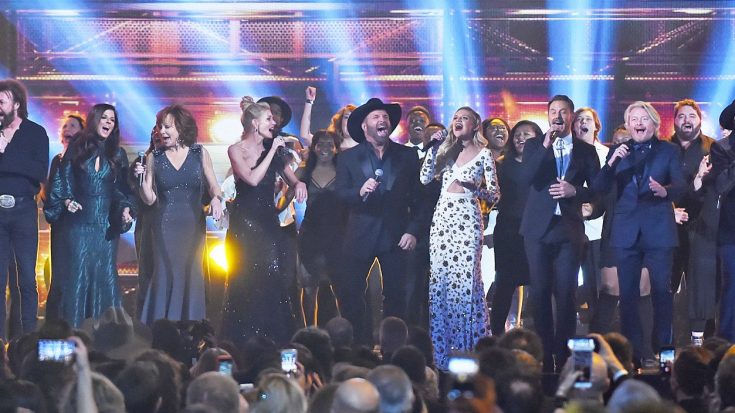 Leading up to the 2017 CMA Awards, everyone knew it would be hard to compete with last year’s opening performance. Since the 2016 CMA Awards were the 50th, the opening performance was as elaborate as it gets, and placed country legends and modern stars on the same stage.

The performance concluded with Randy Travis joining the entire group to sing the final “amen” in his hit song, “Forever and Ever, Amen.” That single “amen” alone helped cement the opening performance in CMA Awards history.

Since last year’s opener was so special, no one expected this year’s would top it. But it was still pretty epic, and featured an all-star cast of fan-favorite artists!

A little over a week before the awards, the CMA announced that this year’s opener would be an “unprecedented opening collaboration.” In that same announcement, the CMA also revealed a handful of artists that would be performing during the opener, including Keith Urban, Eric Church, Lady Antebellum, and Darius Rucker. With the exception of Rucker, all of these artists were also nominated for CMA Awards this year!

Through that announcement, the CMA said that other performers were left unannounced. We finally got the chance to see who those performers were when the CMA Awards kicked off on Wednesday night (November 8)!

Chruch opened the performance singing an a cappella rendition of “Amazing Grace” Then Rucker jumped in with Urban to sing Hootie & the Blowfish’s “Hold My Hand” along with Lady Antebellum. It made perfect sense why they chose to perform that song, since Rucker is the frontman of Hootie & the Blowfish!

The artists were also joined by a choir, who accompanied their performance with some spine-tingling harmonies. And as you would expect, there was one rockin’ guitar solo from Urban!

As if it couldn’t get any better, a whole bunch of artist stepped up on the stage to join the original performers. Just a few of the artists who got up there to join in the fun were Tim McGraw, Little Big Town, and Reba McEntire!

These artists should all be proud for placing another outstanding CMA Awards opener in the books! You can check out part of the performance in the video below!

Couldn't ask for a better way to open the 51st #CMAawards! Watch NOW on @ABCNetwork! pic.twitter.com/CnDKjpCdx6