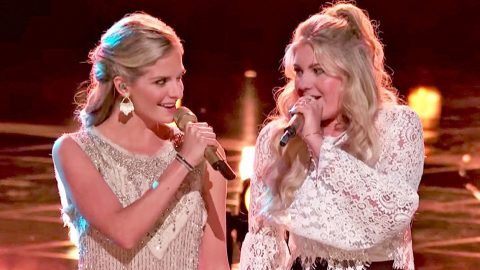 During the battle rounds on this season of The Voice, Blake Shelton paired up country singers Lauren Duski and Brennley Brown. The two talented vocalists faced off over Little Big Town‘s “Better Man” in one of the best battles of the season.

The battle left Shelton with a tough choice, but he eventually decided to keep Duski on his team. However, Brown’s Voice journey didn’t end there. Gwen Stefani used her steal to welcome Brown on her team, which turned out to by a smart choice on her part.

Both Duski and Brown made it all the way to the semi-finals. Week after week, the two proved that they would be the ones to beat in the competition.

Despite being on different teams, Duski and Brown managed to develop a close bond. So when it came time for the Voice semi-finalists to perform duets on the show, Duski and Brown knew they wanted to sing together one more time.

The song the two girls performed together on Monday night’s (May 15) episode of The Voice was Waylon Jennings and Willie Nelson‘s iconic duet “Good Hearted Woman.” Changing the lyrics up a bit, the girls transformed the song so that it came from a female perspective.

Their performance opened with the two singers seated on stools at center stage. While they’re both country singers, Duski and Brown each have their own distinct style and tone. They were able to showcase this during the beginning of their performance, when they each took turns singing parts of the song.

Then, the two stood up and made their way around the stage, interacting with the crowd and the band. They started singing together, and their voices meshed to create electrifying harmonies.

It seems that the crowd loved every second of the Duski and Brown’s performance, and we’re sure you will too! You can head down below to check it out.

We think both of them have a bright future to look forward to!