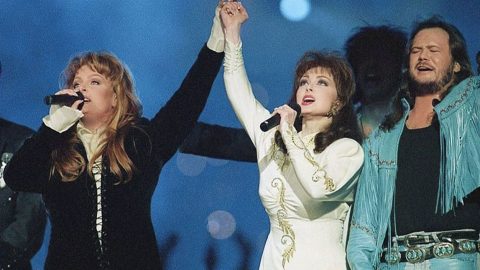 Donning a jet black outfit complete with his signature cowboy hat, Black kicked off the performance appropriately titled “Rockin’ Country Sunday” with a striking delivery of his 1993 hit “Tuckered Out” backed by an army of redneck line dancers. Tucker then strutted out onstage for a captivating performance of “A Little Too Late” chockfull of southern charm.

The performance took a honky tonk turn once the great Tritt took the stage for a killer delivery of his hit single “Trouble.” Once his performance came to a close, the country singer welcomed the great Wynonna Judd to the stage.

“I am honored to introduce a lady whose first album sold 3 million copies,” introduced Tritt. “A lady we love and admire, Wynonna!”

Wynonna then took the stage for a solo performance of her hit song “No One Else On Earth” before being joined by her mother, Naomi Judd, for a sensational duet of “Love Can Build A Bridge,” later joined onstage by their fellow country singers.

There really hasn’t been another performance quite like this one! You can watch the epic halftime show below!