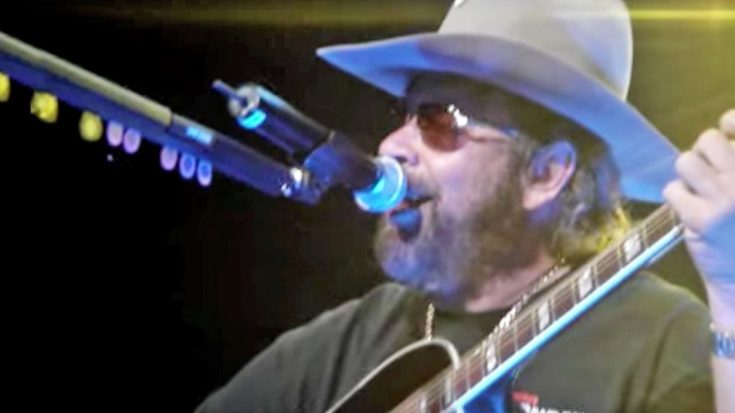 From the moment he walks on stage, you know that Hank Williams Jr. is going to put on a rockin’ show.

He always gives the audience what they want and when they screamed, “Whiskey Bent And Hell Bound”, he obliged. Before he could fulfill his audience’s wishes, he told a story about a chance meeting with rock band The Allman Brothers.

After a few choice words about the singer Cher, Gregg Allman’s wife at the time, Hank Jr.  explained his answer to the band, “I said, ‘Hey Dickey, you get the paper, Gregg, you put a pen over here. You gotta think like the old man, you gotta have somethin’ everybody can relate to. And write it down’.”

He sang the opening lyrics to his song “Whiskey Bent and Hell Bound” and the crowd went absolutely nuts. At different parts of the video you can barely hear the country legend singing over his fans!

Along with his impressive guitar picking, Hank Jr.’s vocals haven’t changed much since he originally released the hit in 1976. The only difference, if it’s possible, is that he put more soul into it.

We could watch him sing this song all day long! Watch Hank Jr. perform “Whiskey Bent and Hell Bound” below.

Y’all wanna see Hank Jr. perform live?! Find a show near you and make sure to take the Bocephus fan in your life. Buy tickets here!