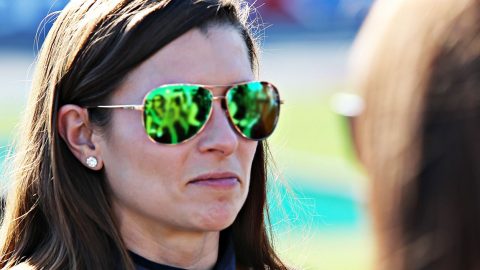 As they both walk away from the sport that has been a major part of their lives for decades, these two racing stars were clearly emotional while turning the page into new chapters of their lives.

Danica Patrick and Dale Earnhardt Jr. have been some of the most visible and publicized parts of NASCAR’s ranks for many years, and each have become known for their time both on and off the track. Showcasing endeavors based in charity, fitness, home improvement, and many more, these two emblematic drivers really brought many things full circle for fans of the sport.

Now, at the end of the 2017 NASCAR Cup Series, both Patrick and Dale Jr. will be walking away from the competition that has helped shape them and their lives.

Sitting down at a press conference just days before the final race of the season, Patrick gave an emotional and heartfelt goodbye – explaining that she was going to exit full-time racing due to a large number of factors. During her statements, she broke down in tears several times.

Beyond her own tearful farewell, Dale Jr. also had an emotional exit from his time on the track and closed out his final race on Sunday, November 19th, with a grand gesture to his team owner that had everyone applauding him! At the end of this momentous race and iconic moment in NASCAR history, Dale Jr. followed through on a promise he gave to Rick Hendrick and handed over his final race helmet in a show of appreciation and honor of their time working together.

With these two illuminated icons in the sport stepping away from the driver’s seat, there was bound to be a few tears shed by them (and, of course, fans), but it was the beautiful and heartfelt message Patrick sent to Dale Jr. that really sealed the final racing day for many. On her favorite social media site, Instagram, Patrick posted a heart-melting message to her longtime friend and colleague that congratulated him on his incredible career and shared a message of hope and faith in the future.

“Congratulations Dale on an amazing career. No one will ever forget you. Ever,” she wrote in a captioned photo of the two after a race. “I know I will always be grateful for your help getting me into NASCAR. You help so many do that and as if your results weren’t enough to leave a legacy, that will be a part of it too. I hope most of all today, that you have fun in the car!!!”

The sentiment was shared by thousands of fans and garnered a lot of attention on social media, racking up more than 25,000 likes and seeing fans from all over comment with equal well wishes.

Read Danica Patrick’s full “goodbye” to Dale Jr. in her post below and let us know what you think in the comments.

Congratulations Dale on an amazing career. No one will ever forget you. Ever. I know I will always be grateful for your help getting me get into nascar. You help so many do that and as if your results weren’t enough to leave a legacy, that will be a part of it too. I hope most of all today, that you have fun in the car!!!