By Miranda Raye on March 31, 2018
Advertisement 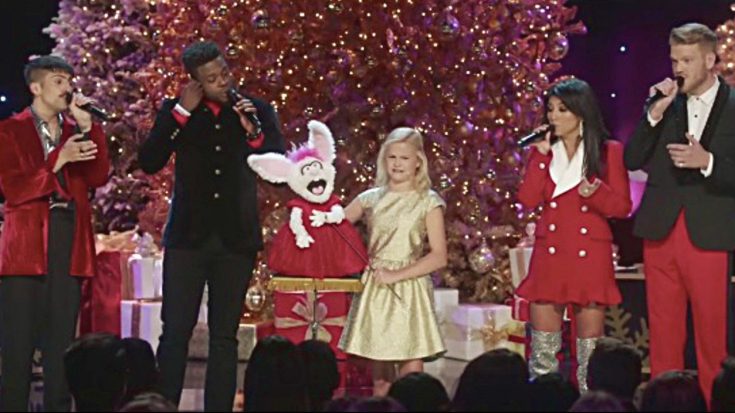 While Darci Lynne has many puppet friends, her spunky bunny Petunia is probably the one you’re most familiar with. She was one of the main puppets that joined Darci on stage during her time on America’s Got Talent, and helped her win the whole thing.

Since both Darci and Petunia are known for their pretty singing voices, they were invited to join a bunch of talented vocalists for a Christmas special in 2017.

That special was none other than the A Very Pentatonix Christmas concert, which is led by popular a cappella group, Pentatonix.

Both donning their finest Christmas dresses, Darci and Petunia were greeted by enthusiastic cheers as they joined Pentatonix on stage. Petunia complimented the group on their singing, saying that they were pretty good, for humans that is.

Petunia agreed to sing a song with them, as long as they knew something that was in her repertoire. Pentatonix hummed the beginning of “O Christmas Tree,” and asked Petunia if she knew that song.

Her response was hilarious, as she instantly recognized the tune as “O Easter Egg.” Pentatonix seemed puzzled, and Darci apologized, saying, “Sorry, she doesn’t know much about human holidays, but I’m pretty sure we can get this one right.”

However, once Petunia took over, it was “O Easter Egg” that she started to sing instead of the beloved Christmas classic. Through the song, Petunia told the story of a rotten Easter egg that was quite disgusting, yet still made her hungry.

By the end, Petunia was left proclaiming how she wished the Easter egg was something much sweeter, singing “O Easter egg, o Easter egg. I wish that you were chocolate.”

Even though Petunia didn’t treat the audience to a Christmas song, they didn’t seem to mind at all. In fact, they were quite entertained! We’re sure you’ll be as well when you check it out in the clip below.

Good luck getting this song out of your head!