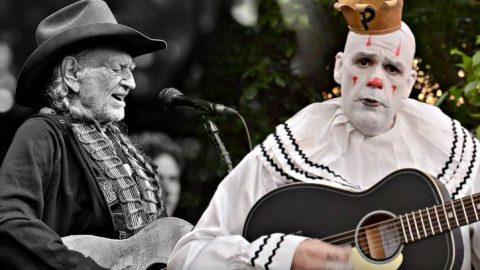 With his hearty baritone voice and impressive talent as a musician, this sad clown delivers an ode to a true country classic in a new video shared with his massive fanbase.

Taking on one of Willie Nelson‘s iconic songs from 1975, Puddles Pity Party croons like a mastered country singer in one of the most recent installments of his YouTube series of the same name.

Puddles, whose real name is Mike Geier, first rose to fame with a handful of viral videos uploaded in 2013 and has since performed on tours with big name headliners and various vaudeville shows. He also garnered a large amount of attention after his mind-blowing audition for America’s Got Talent in 2016.

This viral sensation filled with talent has become an internet favorite and known for his distinct costume, impressive vocal talent, and depressed persona. Part of his identity is not speaking on stage or during interviews – instead he just sings.

“This incredible song was written by Will Callery,” Puddles writes about his performance of ‘Hands On The Wheel’. “Recorded by Willie Nelson for his Red Headed Stranger epic. I love performing and recording in nature. It’s like I’m inside of a painting. Surrounded by swirly, velvety art. I hope ya likey.”

While this video is somewhat unusual, there is absolutely no denying what a fantastic job Puddles Pity Party did with this remarkable performance!

Check out Puddles Pity Party singing Willie’s unforgettable “Hands On The Wheel” below and let us know what you think about it in the comments!