By Jennifer Pernicano on May 2, 2017
Advertisement 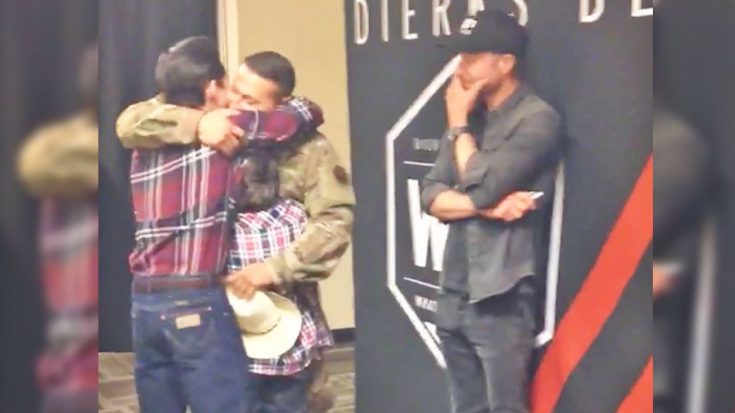 We have all watched military homecomings on YouTube or on television, including country star Dierks Bentley. It is a rarity to be part of one, but that all changed for Bentley when he helped a military father surprise his kids at a concert.

While backstage DURING a meet and greet, Bentley was talking to Corina Mendez and her two sons when they got the surprise of a lifetime. The boys’ father, and Corina’s husband, Staff Sergeant Steven Mendez, appeared almost out of nowhere, and the older son was so stunned, he cursed!

After quickly apologizing and letting his younger brother get the first hug in, the boys embraced their father and the tears just started flowing. Bentley took a step back and put his hand over his face, clearly overcome with emotion.

As the camera got closer, you could see just how emotional the whole family was to be able to be reunited after ten longs months of being apart. This all went down backstage, but Bentley wanted to honor the Mendez family in front of the entire crowd, so he brought them on stage in the middle of his concert.

“It has profoundly changed my life seeing what happened backstage,” he told everyone. “I just want to thank you for your service, for your sacrifice, God bless you.”

Bentley and Staff Sgt. Mendez exchanged patches on stage and took photos together as the crowd chanted, “USA! USA! USA!”

Seen many military family reunions on tv… first time to get to participate in one. Life changing. Thanks Staff Srg Steven Mendez and your family. #Fresno

Watch their tearful reunion below.

Dierks Bentley helped make one family’s dream come true as he surprised them with their father returning from overseas after 10 months. The reunion was so sweet. #thankyouforyourservice #welcomehome #familyreunion Our love to Corina Mendez Steven Mendez and family! Dierks Bentley

Take a look at the moment Bentley brought the family on stage below.

To keep the love flowing one more video of Dierks Bentley presenting the Mendez family to the sold out arena Saturday night.