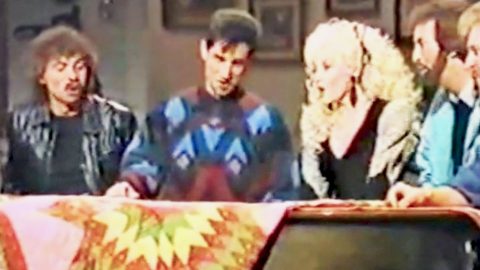 Dolly Parton has one of the most extensive resumes of any country artist out there. A singer, songwriter, musician, actress, producer, author, and businesswoman, there’s basically nothing out there that Parton hasn’t done.

In 1987, Parton added the title of “variety show host” to her name when her TV series Dolly was picked up by ABC. The show ran into the next year, and featured some of the brightest talents in country music at the time.

The Oak Ridge Boys were one of Parton’s many musical guests on the show. They were featured in the episode that aired on November 8, 1987. The group performed several songs, and per Parton’s request, sang a short snippet of their big hit, “Elvira.”

Released in 1981, “Elvira” hit number one on the Hot Country Songs chart and was a major crossover success. After all of this time, the tune remains the Oak Ridge Boys’ signature song. It is also one of the most recognizable country songs in history.

Because of that, we’re sure you’ve heard “Elvira” hundreds of times before. But just wait until you hear Parton sing it with them!

Joining the Oak Ridge Boys on stage, Parton introduced each band member before she asked them if they would mind singing “Elvira” along with her. They were happy to oblige, and broke out into an animated performance with only Parton’s piano player accompanying them.

Parton sang right along with all of the guys. The addition of her voice gave the song a new sense of energy, and the studio audience seemed to enjoy it.

All of the performers were having a blast, and they laughed and joked around on stage. During the famous “oom poppa omm poppa mow mow” line, Parton lip-synced along to make it seem like she was the one singing down so low!

Go ahead and scroll down below to enjoy the Oak Ridge Boys’ hair-raising “Elvira” collaboration with Parton. They start singing the song around the 4:25 mark in the clip. But you are welcome to watch the whole thing if you’d like to see more entertaining performances and hear some fun stories!

Who wants Parton and the Oak Ridge Boys to team up on “Elvira” again? We sure do!