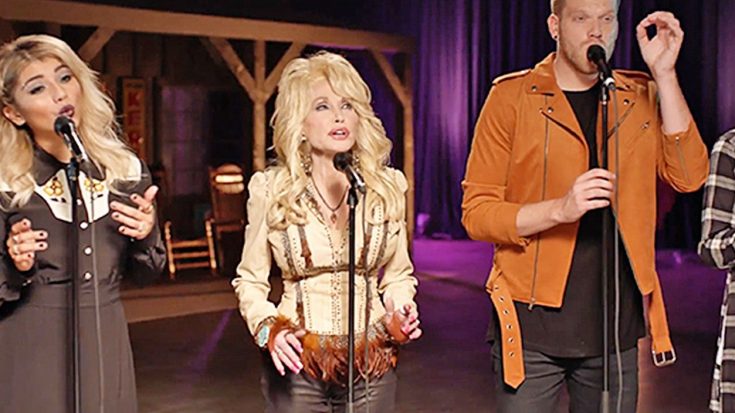 The incredibly successful a cappella group Pentatonix has won over the hearts of their astounded viewers with their searing talent and infectious personalities. Fans were elated when the group made their way into their own Christmas special on NBC titled A Pentatonix Christmas Special in which the singers encountered iconic performers throughout the experience and showcased their music skills!

Seeing that the group previously performed with country legend Dolly Parton not only on their Youtube page, but on the NBC competition show The Voice, it was no surprise when the blonde bombshell appeared in the holiday event!

Pentatonix members were eager to cross paths with Parton yet again, as she kindly greeted the singers with warm wishes and even warmer Christmas sweaters that she wittingly referred to as “Christmas sweaters of many colors” after her signature song that progressed into a series of highly successful films.

As the group admitted that they unfortunately didn’t have a gift in return for the singer, Parton exclaimed that her genuine wish was to hear “a beautiful Christmas song.” Needless to say, the members were elated and prepared for the sudden occasion! The transitioned into an absolutely chilling performance of the popular holiday hit “Silent Night” as Parton watched in awe of their remarkable talents.

Parton even chipped in near the end of the performance, attempting to imitate an insanely low note alongside the singers! Talk about an unforgettable moment!

Watch their encounter below!