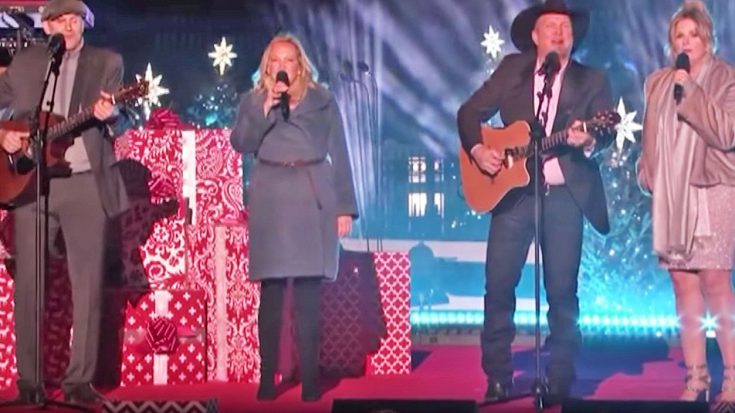 Country music duo Garth Brooks and Trisha Yearwood helped the first family light up the sky at the 94th Annual National Christmas Tree Lighting ceremony with a touching performance that will bring you to your knees.

Joined on stage by the iconic James Taylor and his wife Kim, the talented singers delivered a moving performance of Thanksgiving tune, “What I’m Thankful For.” The four of them took turns singing the emotional lyrics detailing what they are thankful for this year.

The ceremony took place Dec. 1 with musical performances by The Lumineers, Kelly Clarkson, and more. Former President Calvin Coolidge started the tradition back in 1923, lighting up the sky with over 2,000 bulbs on the 48-foot tree.

“What I’m Thankful For” is featured on Brooks and Yearwood’s first ever collaboration album, Christmas Together, featuring the dazzling vocals of Taylor. The album debuted at No.1 on Billboard’s Top Country Albums chart and the two have been delighting fans with performances of their festive tunes since.

You can watch the touching performance in the video below.