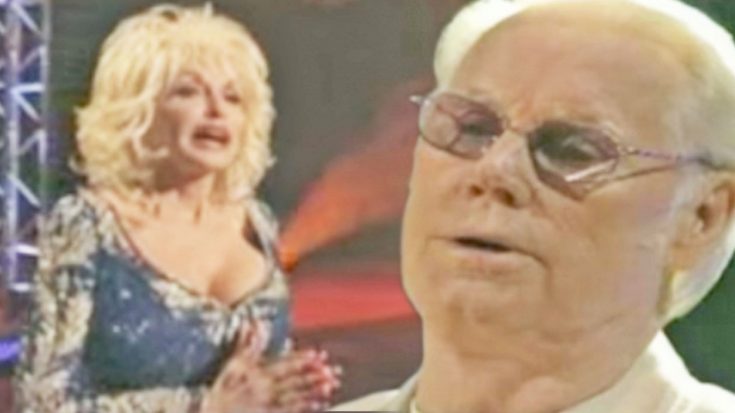 As country music artists, there are always going to be songs that are passed around before they find the right home. Unfortunately for this country singer, he passed on quite a few that turned into iconic hits for other singers.

George Jones decided to put an album together in 2005 of all the songs he wished he recorded, including some he said “no” to, called Hits I Missed…And One I Didn’t. Of course, the one hit he didn’t miss was “He Stopped Loving Her Today”, which he actually almost didn’t record!

The track listing included Willie Nelson’s “Funny How Time Slips Away”, Randy Travis’ “On The Other Hand”, Merle Haggard’s “Today I Started Loving You Again”, and Hank Williams Jr.’s “The Blues Man”.

The video begins with a newspaper headline saying Jones was arrested and followed with the neon lights of Las Vegas showing that he is playing in a concert. Both Jones and Parton each stand on an empty stage to sing their respective parts.

Jones has a bit of a wild past and he owns up to it in this music video. During the verse where he sings the lyrics, “I got so sick from speed an’, all the stuff they said I was needin’/If I was, to keep, pleasin’, all of my fans/I got cuffed on dirt roads, I got sued over no-shows/But you came and took all that old load, down off this blues man,” footage of his DUI arrest is shown as well as a marquee sign saying his show was cancelled.

It’s almost as though this song was written especially for Jones, as he is nicknamed “No Show Jones”, and has truly lived the tale of this song. Jones and Parton come together for the final chorus to sing in perfect harmony.

Watch their music video for “The Blues Man” below.